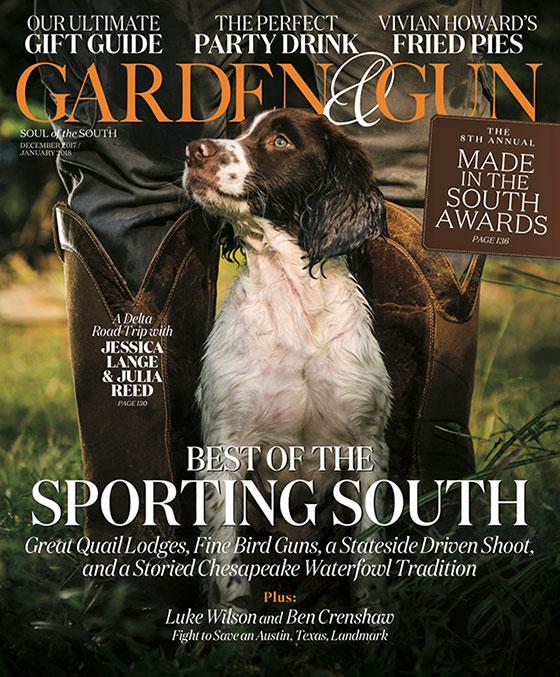 To coincide with the brand’s 10th anniversary of its 2007 launch, Garden & Gun magazine is debuting a redesign for its December 2017/January 2018 issue.

David DiBenedetto, senior vice president and editor-in-chief of the magazine, said the pub avoided a "gut job," and sought to "simplify and enhance readability and add content that reflects the brand's growth."

He told Publishers Daily the digital edition will reflect the redesign, but the Web site was revamped in January, ahead of print changes. "The generous white space and updated fonts, combined with the decision to move from a three to a two column layout," will provide a better environment for brand partners' ad creative, he noted.

Garden & Gun, which covers the culture of the American South, will increase its rate base to 400,000 starting with the February/March 2018 issue.

Per the Alliance for Audited Media, total circulation increased by 8.4% in the first half of 2017, compared to the same time period in 2016. Paid subscriptions were up 8.1%, and newsstand sales were up 8.5%. The brand says it reaches an audience of 1.6 million.

The magazine’s hometown of Charleston, South Carolina, as well as Southern cities “with rich, multicultural histories,” such as New Orleans and Savannah, Georgia, “inspired the evolved aesthetic” of Garden & Gun’s new look, according to a company statement.

Marshall McKinney, design director of Garden & Gun, said the redesign has “intensified the look of our section openers, adding rich, full-bleed photography, enhanced the boldness of the typeface and made the content more inviting throughout.”

In the latest issue of the magazine, which went on sale yesterday, Garden & Gun has also introduced a new food section, called “Jubilee” (the same name as the brand’s annual three-day food and entertainment event), to cover Southern food and drink.

The eight-page section houses Garden & Gun’s cooking, cocktail and restaurant columns in one place, including “Fork in the Road,” the restaurant column by author and director of the Southern Foodways Alliance, John T. Edge, as well as new columns on Southern-made products and Southern food traditions.
food, magazines, redesign
Next story loading