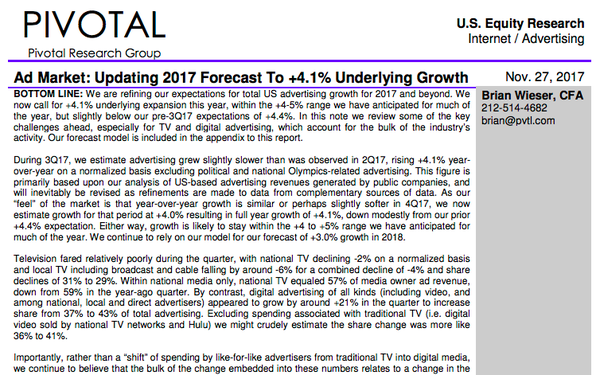 “We now call for +4.1% underlying expansion this year,” Pivotal Research Group’s Wieser wrote in a note sent to investors this morning. Noting that the revision is still within the range he has been tracking much of the year, he nonetheless conceded it is “slightly below our pre-Q3 2017 expectations of +4.4%.”

Wieser goes on to outline “key challenges ahead, especially for TV and digital advertising, which account for the bulk of the industry’s activity.”

“Television fared relatively poorly during the (third) quarter, with national TV declining -2% on a normalized basis and local TV, including broadcast and cable, falling by around -6% for a combined decline of -4% and share declines of 31% to 29%,” Wieser writes. “Within national media only, national TV equaled 57% of media owner ad revenue, down from 59% in the year-ago quarter.”

While digital ad spending continues to expand -- +21% in the third quarter -- Wieser says it’s not part of a “like-for-like” shift among among advertisers pulling out of traditional TV and putting more of their budgets into digital.

“The large brands that dominate TV are generally weak at the present time, generally constraining total budget increases to low single digits or otherwise reducing them, and with few increasing spending on digital by more than single digits,” Wieser notes. “TV may be losing some budget share from these advertisers, but maybe one percentage point a year rather than two.”

Conversely, Wieser says digital is primarily benefiting from “ecommerce brands, app developers and businesses that are generally too small to efficiently use television.”

The outlook for other media is even more mixed -- especially for magazines and newspapers.