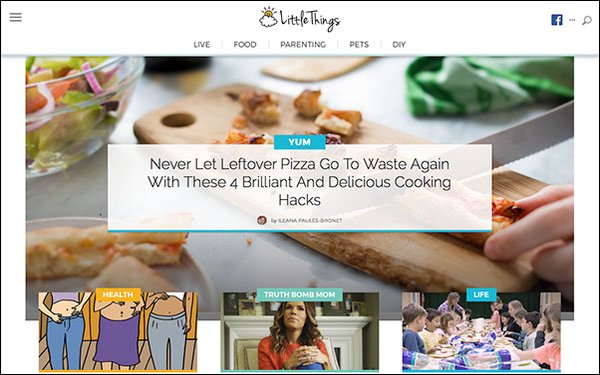 LittleThings has hired a bank to help the digital publisher explore a range of options, including putting itself up for sale or bringing in an outside investor.

Joe Speiser, cofounder and CEO of LittleThings, told The Wall Street Journal, which first reported the news, that the company had received five inquiries from media companies before it hired a bank earlier this month to help determine the right course of action.

Speiser said LittleThings could expand its business by tapping into a bigger media company’s advertising sales force or distribution network for greater scale.

LittleThings, which has about 100 employees, expects to bring in nearly $50 million in revenue in 2017, mostly from programmatic and direct advertising sales, which represents considerable growth from last year’s $34 million in revenue, according to WSJ.

LittleThings publishes “positive” and “meaningful” content to uplift women over 30, the company’s president and COO  Gretchen Tibbits told Publishers Daily in February. The brand avoids topics like politics and does not chase millennials, she noted.

More than 50% of LittleThings’ site traffic comes via referrals from Facebook, where it has more than 10 million followers. The publisher focuses on distributing videos on the social platform, as well as hosts a Facebook Live morning show.

Tibbits said LittleThings is primarily a “social publisher” and a “mobile video company” — most of its audience consumes its content on mobile.

LittleThings.com had 41 million unique visitors in October, according to comScore, though that does not include views from videos uploaded directly to Facebook, Speiser told WSJ.

The problem with being reliant on Facebook views became evident during August and September, when LittleThings experienced a 30% decrease in referrals, due to a Facebook algorithm tweak, according to Speiser.

LittleThings is making up for that drop by enrolling in a new Facebook program that allows it to serve ads between video breaks.

The news of LittleThings exploring future options comes as Meredith Corp. announced over the weekend it will acquire Time Inc., continuing a trend of media companies consolidating for greater scale and online advertising revenue to compete with Google and Facebook gobbling up the majority of digital ad dollars.