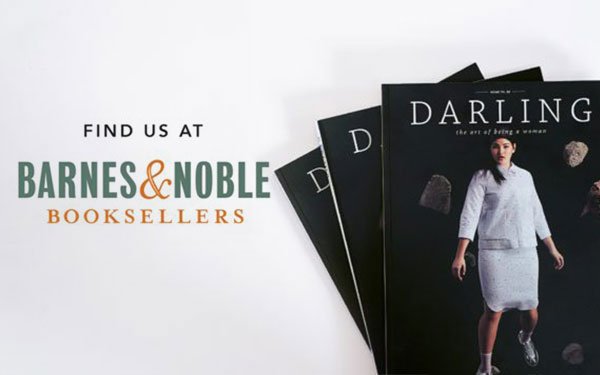 Women-focused quarterly magazine Darling has partnered with Barnes & Noble to have its winter issue sold at all 623 stores across the country this holiday season.

Jess Trinca, SVP and general manager of Darling, stated: "Barnes & Noble is a forward-thinking company, understanding that while the print medium may be changing, it is here to stay. And that content, more than ever, truly determines who graces its shelves.”

Darling magazine “aims to build women's self-esteem with smart and empowering content while also expanding the present cultural ideals surrounding ‘beauty,’” according to the company.

The publication does not retouch or digitally edit the models or celebrities in the book. It presents “realistic portraits of women,” and claims to be the first women’s magazine to do so.

The Los Angeles-based Darling was created by former model Sarah Dubbeldam, who now serves as CEO and editor-in-chief of the publication. It started out as a blog, but after a successful Kickstarter campaign, launched as a print magazine.

The content of each issue is divided into eight “personas,” which are: Dreamer, Hostess, Confidant, Stylist, Explorer, Beautician, Intellectual and Achiever.

The winter issue, which is the 22nd edition of the magazine, features interviews with inspiring women across a range of industries, including Serbian tennis player Ana Ivanovi, comedian Anjelah Johnson (known for her viral character Bon Qui Qui) and indie pop band Echosmith's Sydney Sierota.

The issue will also give readers a sneak peek at self(i.e.), Darling's first feature-length documentary, set to launch next year, in association with retail brand Aerie.