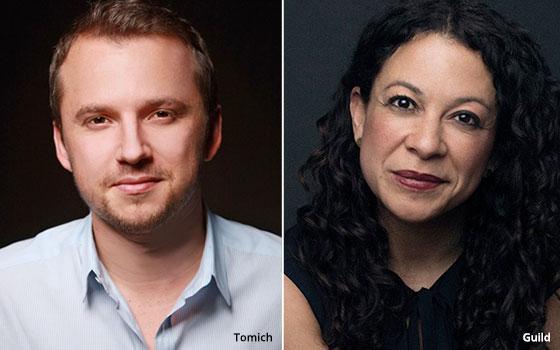 The New York Times has tapped Sebastian Tomich as head of Advertising & Marketing Solutions, the new name of its advertising group.

The group focuses on media, partnerships and services. The NYT also announced it has hired Amber Guild to take on the newly created position of president of T Brand Marketing Solutions. The addition of Guild to the team is part of an effort to divvy up Tomich’s previous responsibilities among a group of people, who will be announced over the coming weeks.

The newspaper wants T Brand Studio's work to evolve to be more agency-like “and we felt it was the right time to bring on an executive with the vision and experience to bring us to the next level,” Tomich stated of Guild's hire.

He added, “We’ll head into 2018 with an already one-of-a-kind offering in Fake Love, a growing content strategy offering, and we’ll be looking to invest in services that leverage the Times’ data and technology resources.”

Before joining the NYT, he was the director of East Coast advertising at Forbes Media.

Tomich will continue to report to executive vice president and COO Meredith Kopit Levien. She previously ran the advertising group before she was named COO earlier this year, when she appointed Tomich to take her place.

Guild previously worked at The Martin Agency, where she was managing director of its New York office. She has also served as president of brand consultancy and experiential design agency Collins. She has worked at digital innovation agency T3, Ogilvy & Mather, Saatchi & Saatchi and Y&R.

Howard will be responsible for the NYT’s category-organized sales team in New York, its U.S. and international sales offices, as well as the group’s planning and operations teams. Howard was most recently senior vice president of advertising. She joined the newspaper in 2016 from WebMD, where she was executive vice president and chief of consumer strategy.

Wright will oversee a new division that will drive large-scale, integrated programs. He will work closely with advertising partners and the NYT's news, product and technology teams. He most recently served as senior vice president of advertising and publisher of The New York Times Magazine. He has been at the paper since 1997.