Landor Projects 'Trump' To Remain No. 1 Issue For Brands In 2018 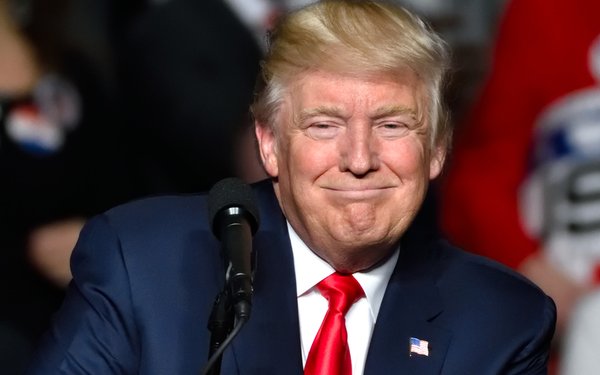 As Donald Trump’s presidency approaches its second year, consumer brands are expected to have a higher-than-usual political profile in 2018, as consumers demand to know where they stand on key issues. That’s the view from WPP’s branding consultancy Landor, which just released its 2018 outlook for brands.

While other issues, such as Amazon’s expanding influence and the role of new technologies -- especially AI, blockchain, etc. -- will be a big focus of branding next year, it is the heightened state of political discourse that remains the No. 1 factor, according to Landor’s experts.

“We’re currently in a period of significant disruption, not only from technology, but also, exponentially, because of the political climate,” explains Stuart Sproule, Landor’s president of North America. “Brands have entered a new frontier, operating on high alert, ready at a moment’s notice to voice their opinion on contentious policies or topics.

"Consumers want to know that their brands share their ideologies. To foster strong brand communities, companies should ensure they have authentic values and a well-articulated identity,” he adds.

The following are the seven top highlights from Landor’s 2018 predictions:

1. No Trump-fatigue for brands: From stances on immigration to implementing a travel ban, the Trump administration released a number of controversial policies that motivated brands, including Apple, Budweiser and Lyft, to publicly voice their opposition. Heading into the second year of his presidency, Trump shows no sign that controversial policies are behind him. Brands will continue to overtly promote their points of view so customers and employees know where they stand.

2. Retail brands think outside the box in response to Amazon: According to Fung Global Retail & Technology, retailers including Macy’s, CVS and Payless have closed more than 5,000 stores as consumers increasingly shop online. In an effort to win back customers, retail brands will pursue new opportunities, such as unusual partnerships and subscription service models.

Walmart recently partnered with Lord & Taylor and will sell certain higher-end products on Walmart.com. The discount retailer is also testing a pricing strategy in which it charges more to buy certain products, such as Colgate toothbrushes and Purina dog food, online rather than in stores. It's a move to encourage people to shop in its brick-and-mortar locations.

3. AI is ubiquitous: Artificial intelligence will no longer be a tool used just by tech giants, like Google, Amazon and Apple. A wide spectrum of companies will incorporate AI to improve their brand experience. Best Buy is utilizing Amazon’s Alexa in its stores to answer customers’ questions and provide product recommendations. The Wynn Las Vegas hotel put Amazon Echos in its rooms, allowing guests to control lighting and temperature with their voice.

4. Blockchain changes the rules: Blockchain lets users permanently establish rules, record processes and protect data — and, best of all, it can never be changed or overridden. Brands will use this technology to remove human error, ensuring that all customers receive the same benefits and service. For example, if a brand offers a loyalty discount, it can code the perk into its blockchain so all eligible shoppers receive the benefit — even if an employee forgets to process it.

5. Brands get high: Next year, Canada is expected to legalize marijuana, and the United States appears increasingly to be heading down the same path as more states approve its medical and recreational use. Large, mainstream brands will embrace the product, not wanting to miss out on a new market that generates billions of dollars.

6. Hotel giants pop up to compete with Airbnb: Capitalizing on travelers’ desires for unique experiences, companies like Collective Retreats and Blink are creating pop-up hotels — tents outfitted with luxury accommodations — in locations such as national parks and music festivals; places traditional hotels can’t go. As bigger hotel chains compete with Airbnb, look for them to venture into the pop-up business, providing their guests with a wider range of options.

7. Employee treatment trumps CSR: Consumers have become savvy to brands hopping on social issue bandwagons just to check-off the “doing good” box. While they still want to support brands that give back, shoppers are more concerned about purchasing products from brands that treat employees well. Companies will place renewed emphasis on providing good benefits, competitive salaries and a strong corporate culture to create a more engaged workforce. This will raise the value of the brand in shoppers’ eyes and create a strong group of brand ambassadors: its employees.