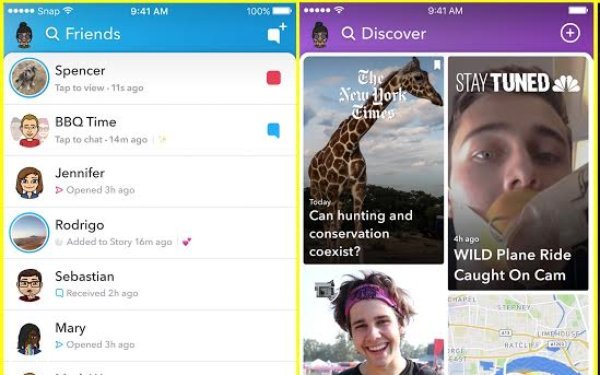 Snapchat pulled back the curtain on a major redesign of its app on Wednesday, putting video from its publishing partners front and center in a new "Discover" section.

Snapchat Vice President of Content Nick Bell said the company plans to focus on a “curated pool of content from premium publishers,” and is looking to a major over-the-top video player for inspiration: Netflix.

“Netflix is a really interesting model because they use technology, they use machine learning and customization to surface content that is relevant to you and your interests,” Bell said at the Business Insider Ignition conference on Wednesday.

“All of that content comes from a curated pool," he added. "It is premium content, and it is not everything in the world, but it is a strong pool of content to pull from. The difference between that and an open platform, where anyone can post anything, is obviously pretty significant.”

As media companies seek to cash in through the big platforms, they also fear upending their existing businesses. OTT streaming bundles are so compelling to media companies because they keep subscription revenue flowing even as consumers cut the cord, while adding potential advertising revenue.

That being said, Snapchat is also more selective when it comes to content, rotating in channels and shows from publishing partners, and prioritizing content that is exclusive to its platform.

Bell said that the company has worked with its partners to optimize content for its service. “When we launched Discovery in 2015, our publisher partners took content that performed well elsewhere and put it onto our platform,” Bell said. “What we soon discovered is that content created for another platform doesn’t necessarily work on mobile.”

Of course, while video from media partners will be a big part of the redesign, Snapchat also plans to filter videos and images submitted by its users. Bell cited the 2016 election, the Halloween terror attack in New York City and the recent hurricanes as examples of where user-submitted content proves invaluable.

“I sometimes describe [Snapchat] as one of the world’s largest outside broadcast trucks. Our stories product allows us to go places all over the world,” Bell said.  "Our community was there [at recent news events], and they were capturing the content with their cameras, sharing it with their friends -- and they were also sharing it with Snapchat and the community. We then take that content and we package it, fact-check it, validate it, provide a layer of context and publish it to the wider audience all over the world.”