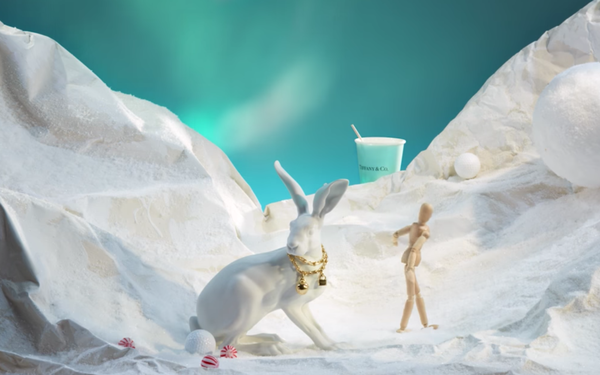 With Thanksgiving safely behind them, this is the week retailers throw their arms open wide to carol-humming consumers, and Tiffany & Co., Macy’s and H&M are pulling out all the stops.

H&M is continuing in its tradition of elaborate holiday films, with a three-minute plus film starring singer Nicki Minaj and actors Jesse Williams and John Turturro, who help a brave little girl talk some sense into Santa Claus’ evil brother. (The theme meshes well with the Swedish retailer’s charity partnership with UNICEF, the recipient of this year’s fundraising efforts.)

Macy’s, which launched its merchandise-free Lighthouse spot several weeks ago, is leaving those lonely beaches behind and returning to stores with sweet takes on a dad’s-away-at-sea family, a shy teenager and romantic stringer of lights. The spots, from BBDO New York, aim to tell the story of people brought together by the perfect gift. Ads are running on TV and online.

For those who like to track holiday retail ads from across the pond, John Lewis’ spot this year may lack the energy of last year’s Buster The Boxer ad, but Moz the Monster is a different kind of irresistible.

Tiffany & Co. is bringing a sparkling snowscape to life with plenty of diamonds, a bunny and nimble wooden mannequin.

The luxury retailer just reported a 3% increase in its third-quarter sales, which rose to $976 million, although comparable store-sales fell 1%. (On an equal currency basis, those results were flat when compared to the third quarter of last year.) Net earnings climbed 5% to $100 million, from $95 million in the same period a year ago, somewhat better than expectations.

Observers are encouraged by the improvement. “A year or so ago, the whole organization appeared to be struggling to keep up,” writes Neil Saunders, managing director of GlobalData Retail, in his report on Tiffany’s progress. “But a raft of initiatives have since helped to pull elements of the proposition into the twenty-first century.”

Among them are its “greater emphasis on fashion and designer collections, generating interest among younger consumer segments.” Those include urban Tiffany HardWear range, the Elsa Peretti line and Everyday Objects.