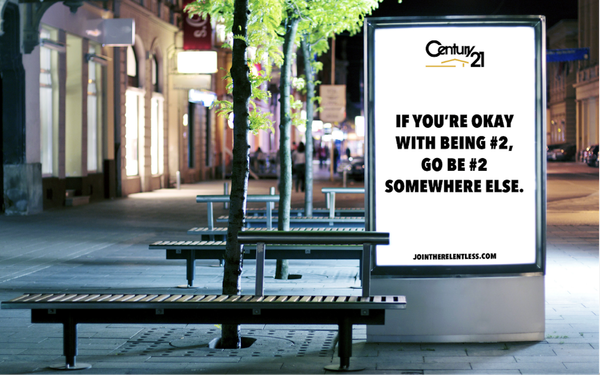 Century 21 is targeting “ambitious go-getters” in a new recruiting campaign.

The effort, created by MullenLowe, includes tongue-in-cheek out-of-home, audio streaming and social ads. It is strategically timed in the wee hours of the night and morning, targets entrepreneurial-minded self-starters, doers and workhorses -- whether they are up early, on the go, “always-on” or fighting sleep.

The company is “looking for the best and the brightest, not only within the real estate industry, but also outside it,” said Cara Whitley, chief marketing officer, Century 21 Real Estate. The campaign points to a new era at the company, which was ushered in by Nick Bailey’s appointment in August as president and CEO.

It is running in Boston, Indianapolis and Seattle through the end of December. Each of the cities is known for their entrepreneurial and innovative spirit, but ultimately, like the real estate agents that serve them, they each have their own local attributes and characteristics, she says.

“For now, the plan is to digest the overall effectiveness of the campaign and then decide where to expand in 2018," Whitley tells Marketing Daily.

“This is a focused effort to highlight the mindset that really defines the ‘relentless’ Century 21 agent," she says. “The campaign itself is a natural progression to the brand identity work we started last year that focused on the importance of tech innovation, human knowledge and shared experiences.”

Recruiting is not a “one and done” process, she adds.

“It’s prudent for agents and other industry professionals to spend time going over the ‘pros and cons’ of transitioning to a new broker or entering a career that makes even better sense than their current one,” Whitley says. “Our goal is to start a conversation and build relationships with potential new agents, brokers and other like-minded entrepreneurs, so if and when they’re ready to make a move, they know that Century 21 shares their beliefs and mindset.”