Tesla Builds 'House of the Future' At Auto Show 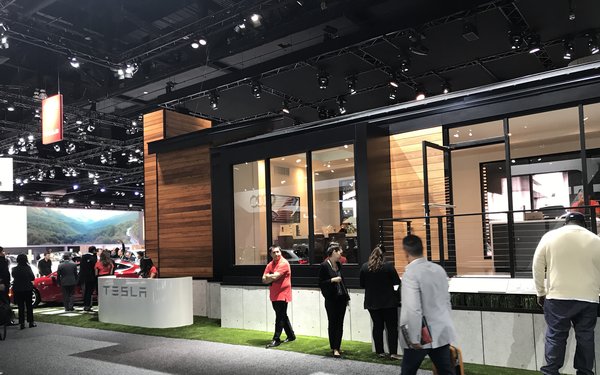 Despite a lack of a press conference or other news announced by the automaker at the show, auto journalists and others who had access to the show floor during the media preview Wednesday milled around the display.

The Silicon Valley-based automaker built an elegant and understated solar-powered “house of the future” as the backdrop to the Tesla Model 3, Model S and Model X. All of the power in the house was generated by solar panels on the roof of the elegant structure.

The display is rather subdued compared to the flashy promotions of its neighbors, the brick-and-mortar players in the industry, says Michael Harley, executive analyst for Kelley Blue Book:

“It’s ‘home of the future’ theme effectively displays all of its current models while effectively showcasing its solar roof tile technology,” Harley says. “With a presence best described as reserved and on point, the technology giant’s presence at this industry event is more felt than seen.”

Without the need for traditional advertising while relying on its devout fanbase for marketing, Silicon Valley-based Tesla has traditionally shied away from exhibiting at auto shows. It often skips auto shows completely, and when the electric vehicle company does set up, the display is often minimal and often doesn’t include product, much less the entire lineup.

Thousands of attendees will walk past the prominently located display when the show is open to the public Dec. 1 – 10 at the Los Angeles Convention Center.