Spotify Shows Off Its Data Capabilities With '2018 Goals' 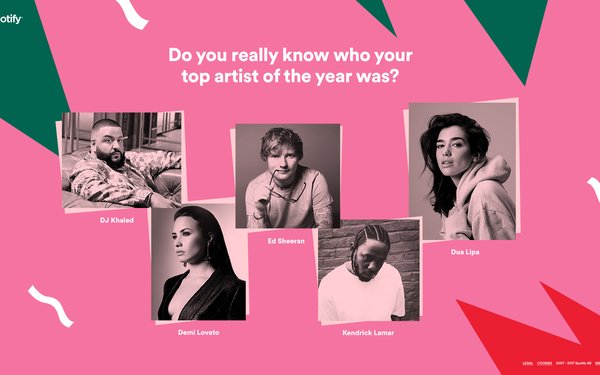 There is little in the world that reflects personality more than music, and as the end of the year marks a natural reflection point, Spotify is showing off how much it knows about its users.

Using its vast data resources, Spotify has launched its annual year-end campaign, revealing insights for their users, potential users, and, for the first time, potential advertisers and marketing partners.

“Spotify’s offering has delivered on the concept of discovery,” Danielle Lee, Spotify’s global head of partner solutions, tells Marketing Daily. “Likewise, our audience, artists and partners are discovering more about themselves.”

For the first time, the effort includes a business-to-business effort targeted at ad creatives and brand marketers (who may already be Spotify fans) to look at Spotify as a place to advance their business goals. Appearing in 11 global markets, the ads include out-of-home, paid media and other elements designed to speak directly to marketers. One headline, for instance, reads “Be as mildly optimistic as the person who created the ‘I think I Cannes playlist.”

“Our clients are fans of Spotify, too, our media business is growing, and it’s time to integrate what Spotify has become with our [traditional] end-of-the-year campaign,” Lee says.

For its traditional end-of-year campaign, Spotify is showing current users personalized information about the artists and genres they streamed in 2017. Via a microsite, the initiative helps users relive the music they discovered in 2017. Features on the site include an interactive quiz covering the users own listening habits and personalized playlists recommending music they may have not have discovered yet. (The streaming service used a group of highly active users — a.k.a. Tastemakers — to collate those lists.)

Spotfiy is also running its traditional ad campaign highlighting the use of its data to tell stories and perspectives on the previous year’s culture and political moments. This year’s effort is themed “2018 Goals” and features things to strive for in 2018 such as “Hit the dance floor with the person who made the playlist ‘Daddy Pence Come Dance’” and “Take a page from the 3,445 people who streamed the ‘Boozy Brunch’ playlist on a Wednesday this year.”

The combined efforts, Lee says, are to demonstrate Spotify’s ability through data mining to reveal more about who people really are, both to themselves and the people who want to market to them.

“We are really able to reflect on who you are as a music listener and who you are as a personality,” she says. “A lot of times, music is used to get us through the ups and downs of life, and it provides insight into who you are.”