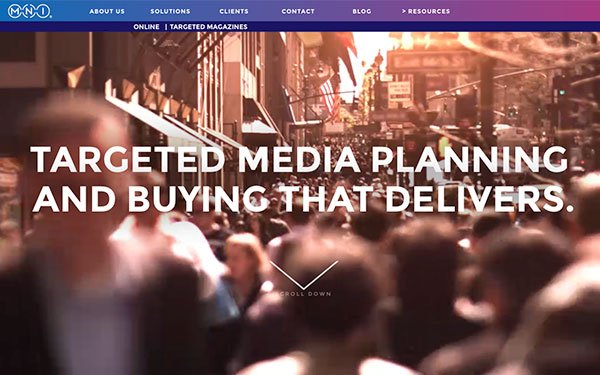 The behemoth publisher Time Inc. is well-known; MNI Targeted Media, less so. Matt Fanelli, senior vice president of digital at the Time Inc. subsidiary specializing in targeted ads, is trying to change that.

This fall, the publisher-owned, performance-marketing agency launched an integrated online and offline campaign to bring awareness to its business, which has been around for nearly half a century selling media planning and buying services, as well as digital solutions in the last decade.

MNI Targeted Media also released display ads as part of the campaign, designed to appeal to everyone from junior media planners to CEOs. Follow-ups were sent to drive e-newsletter subscriptions for those who wanted to learn more about the agency's business.

Time Inc.’s MNI Targeted Media has 1,200 clients/campaigns a year, but Vicki Brakl, vice president, marketing at MNI Targeted Media, said this was the time to launch an in-house campaign highlighting the company's business.

“Competition is a lot stiffer than it used to be five, six, seven years ago and brand and personality really matter," she said. “We are on the precipice of talking about ourselves and big marketing." MNI Targeted Media’s 70-plus sales force creates its campaigns in-house. As a result, the agency could use its own media to promote its business, resulting in a campaign that cost less than a regular client.

“The average American household has 13 screens,” Fanelli told Publishers Daily. MNI Targeted Media’s goal, he said, is to reach audiences across those devices, which are “tethered together by Wi-Fi — so it’s about how to immerse a specific household” via those connected devices, Fanelli said.

The latest campaign included six-page cover wraps on People delivered over a four-week period in September, as well as profiles created on Twitter to represent each cover wrap theme — such as @DataDontMatter, @SocialSkeptic25 and @WhyGoLocal — which shared relevant articles on data and location-based ads.

“It’s not like someone going out and buying a full page ad on People and paying regular pricing. We sell digital display media and that’s what we’re running it through,” Brakl said.

A big inspiration behind the format of the campaign's creative was the “Mean Tweets” segment on the “Jimmy Kimmel Live” late-night talk show, where celebrities read the rude tweets people post about them.

The cover wraps have a tongue-in-cheek, comedic tone, with cute cartoon graphics of birds. One “tweet” reads: “I’ve had gas pains more relevant than what’s on my Twitter feed,” with the come-back tweet: “Last year, 3.8 million Americans live-tweeted the Super Bowl. If your poots can do that, we’re blown away. #toottoot”

Time Inc.’s MNI has a variety of different offerings. Harpoon Digital, which launched last year, is a digital strategy and service agency within MNI Targeted Media. It focuses on regional brands or small agencies and provides creation, targeting and execution services for digital media campaigns, including real-time delivery and reporting on performance.

Rather than building out their own team, these brands or agencies can use Harpoon Digital to pay for syndicated research.

Digital agencies owned by publishers can tap into the creative and editorial talent of its parent company, as well as share audience data between brands and publishers. For example, Harpoon can access Time Inc.’s data and audience research for clients and tap into The Foundry, Time Inc.’s content studio.

MNI sells several different proprietary digital products, such as MNIx, its programmatic DSP, as well as DataMatch, MNI Local, MNI Search and MNI Social. Though a majority of what MNI Targeted Media sells is Time Inc. inventory, it isn't limited to its parent company.

According to Brakl, the agency sells across “a myriad of publishers in print, including Hearst, Bloomberg and Meredith. We sell 99% of the U.S. audience in print. We are media agnostic,” she added. “You have to target the entire person. They may go to some sites some of the week and other sites other times in the week.”

Fanelli said Time Inc.’s agency is unique because it spends "an enormous amount of money on research tools" to figure out the right audience for an ad — down to what they do during their day and who is most likely to purchase.

That logic was part of the development of the agency. It wanted to find the right person, regardless of whether the site was owned by Time Inc. or Hearst.

Fanelli noted the recent announcement of Meredith Corp.'s acquisition of Time Inc. does not affect the work of MNI Targeted Media and its services. “MNI Targeted Media, Inc. has enjoyed a strong working relationship with the company for over a dozen years,” he said.