Laphroaig Choir Brings Its Tweet-Carols To The U.S. 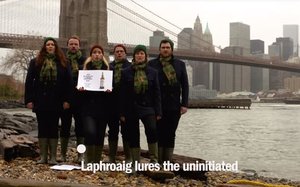 In a seasonal extension, Laphroaig Single-Malt Scotch Whisky formed a choir in its home town of Islay, Scotland, in 2014, the year its “Opinions Welcome” campaign debuted.

The campaign struck an immediate cord, with its anthem video (showing nearly 1 million YouTube views to date) capturing the frank, funny and poetic reactions of real people tasting the “most richly flavored Scotch whisky in the world” for the first time. The following years have seen numerous videos and a robust ongoing #OpinionsWelcome social campaign.

As one would expect, the Laphroaig Choir’s repertoire (new U.S. video below) is a bit out of the ordinary: Christmas and other holiday carols with the traditional lyrics replaced by real consumers’ comments — good and bad — about the whisky’s strong, distinctive flavor.

The lyrics employ a sampling of the best, most popular opinions from over the years, like this one (sung to the tune of “We Wish You a Merry Christmas”): “Laphroaig lures the uninitiated with a sweet scent, then savagely devours them like a ravenous great white shark.”