'The Atlantic' Rebuilds Paywall For 2018 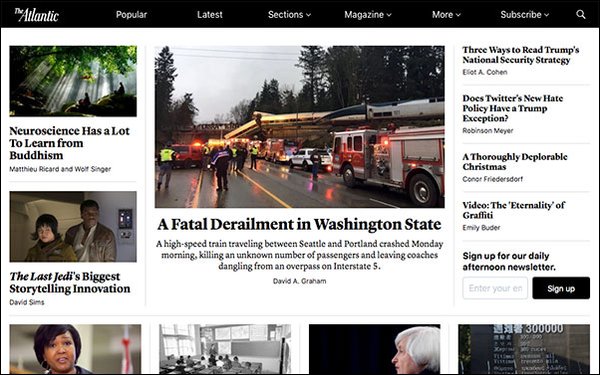 After taking its paywall down 10 years ago, The Atlantic is bringing it back. Next month, TheAtlantic.com will launch a metered paywall allowing readers to access 10 articles for free each month.

“More than a million people come to our site 10 times or more every month. What we’re doing now is we’re saying to that group: ‘Help us continue to expand our journalism,’” Bob Cohn, president of The Atlantic, told The Wall Street Journal.

In 2008, the idea was to pull down the paywall to grow The Atlantic’s digital audience and advertising revenue. Back then, the site had 2 million monthly visitors. This year, it averaged nearly 20 million, representing more than a 20% increase from 2016.

In 2018, the move to put the paywall back is a response to consumers who are increasingly willing to pay for digital content, like Netflix and Spotify, Cohn said.

Earlier this year, The Atlantic started to show signs of toughening up on its digital readers.  In April, it put up a “hard wall” against online readers using ad-blockers, giving them two options: whitelist the site or pay for an ad-free subscription.

In September, The Atlantic introduced its first membership program to provide exclusive editorial offerings, like previews of upcoming features and weekly conversations with journalists, called The Masthead.

In January 2018, readers will be able to choose between three subscription options for TheAtlantic.com: a digital subscription to The Atlantic’s site and app, a digital and print subscription, and both print and digital access plus membership to The Masthead.

Quartz, the business site owned by The Atlantic’s parent company, and the newly launched lifestyle and culture site Quartzy, will not have paywalls.

The Atlantic joins a number of publishers introducing paid products (such as Wired and Business Insider), in an effort to diversify their revenue streams and counter the duopoly of Facebook and Google snatching up digital ad dollars.

While the The Atlantic did have declines in its print advertising business, Cohn told WSJ it experienced growth in its digital advertising, events, consulting and print circulation revenue this year.