Continuing its push for more prominent online disclosures, the Federal Trade Commission says in a new report that some "common sense" techniques can "greatly increase the likelihood that consumers will recognize an ad as an ad.

"Ads should be identifiable as advertising," the FTC writes in the report, "Blurred Lines: An Exploration of Consumers’ Advertising Recognition in the Contexts of Search Engines and Native Advertising." 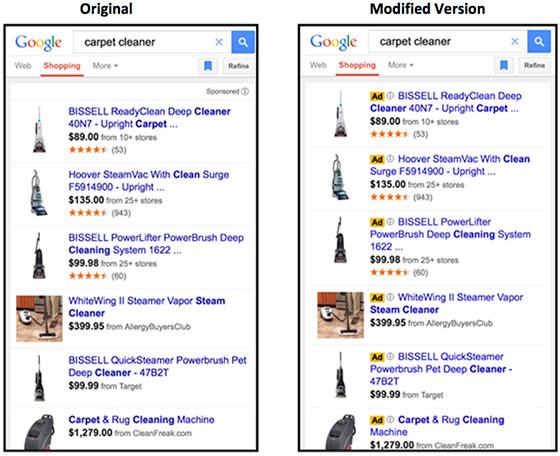 The report draws on a study that attempted to determine how various formats for disclosures influenced people's perceptions of search and native ads. For the study, researchers presented 24 people with ads as they originally appeared (or close to the way they appeared) in search results or on publishers' sites, and 24 other people with ads that had been modified to make the disclosures more prominent.

For example, researchers modified Google search ads by replacing the word "sponsored" in Google's Shop Box with a bright yellow icon that said "Ads" in bold black lettering. And researchers revised native ads on Time magazine's mobile site by deleting the phrase "Around the Web,” centering the words "Paid Content" above each of the recommendation widgets, and inserting the word "Ad."

The FTC said that the modifications increased the likelihood that people correctly identified ads. "Overall, without testing for statistical significance or controlling for confounding factors, we found that, across the different ads we tested, the observed effects of the disclosure modifications were all in the positive direction," the report states.

The report shows that the FTC still has native advertising in its sights, says Jeff Greenbaum, an advertising lawyer with Frankfurt Kurnit Klein & Selz.

"The FTC continues to be extremely concerned that consumers understand what they're seeing when they look at content online," he says.

At the same time, Greenbaum says marketers shouldn't overreact to the report. "The FTC is not approving any particular technique tested," he says, adding that the agency isn't requiring marketers to adopt any specific formats that were tested.

The study, conducted in 2014 and 2015, examined ads on desktop and mobile search results pages for Google and Bing, mobile pages of Time magazine and the Chicago Tribune, and desktop pages of Yahoo and Gear magazine.