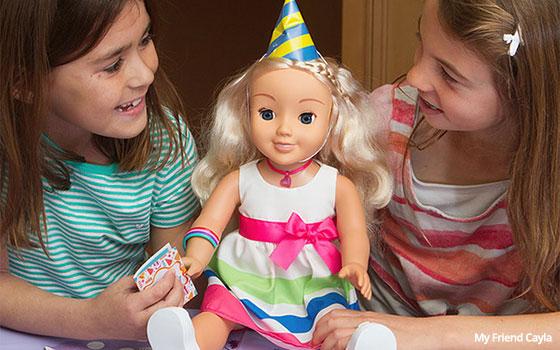 Watchdogs are renewing a request that the Federal Trade Commission take action regarding connected toys and smartwatches aimed at children.

Groups including the Electronic Privacy Information Center, Campaign for a Commercial Free Childhood, Center for Digital Democracy and Consumers Union say the FTC has not yet taken action on a complaint they filed last year regarding the toys My Friend Cayla, and the i-Que Intelligent Robot. The organizations alleged that both toys threaten children's privacy by recording and collecting their conversations. Regulators in Germany subsequently banned My Friend Cayla, going so far as to instruct parents to destroy the doll.

The advocacy groups on Monday reiterated their call for the FTC to take action and for Amazon to stop selling the toys.

In July, the FTC said that a federal law limiting companies' ability to collect data from children applies to businesses that gather data from connected toys and other devices. The Children's Online Privacy Protection Act, which initially regulated data collection at Web sites, also "can apply to the growing list of connected devices that make up the Internet of Things," the FTC said in its guidance.

COPPA generally prohibits operators of online sites or services aimed at children under 13 from collecting their personal information without parental consent -- although there are some exceptions. The FTC now defines personal information broadly, including names, email addresses and street addresses as well persistent identifiers such as tracking cookies, IP addresses, device identifiers, geolocation data, photos and voiceprints.