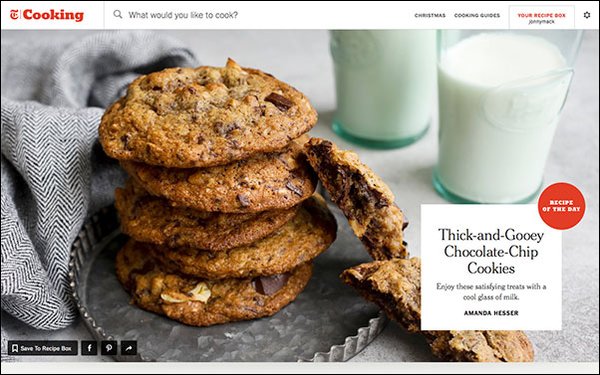 Since its launch in June, the paid product of The New York Times’ Cooking vertical has gained 23,000 digital subscribers.

That’s over 20,000 people paying $5 a month for access to NYT Cooking, which provides over 18,000 recipes and 40 guides on cooking basics, available on its website and app.

While advertising revenue have dipped for the legacy publisher, the Times has focused on new ways to make revenue from subscriptions and merchandise.

In November, it launched its first hard-copy cookbook, “The New Essentials of French Cooking,” available exclusively at The New York Times Store, which the company relaunched this summer to sell branded merchandise.

It also introduced gift subscriptions for NYT Cooking, offering one year of unlimited access for $40.

The Cooking site experienced about 10% growth in traffic year over year in November 2017 — and up 12.5% on the day of Thanksgiving year-over-year. In June, Cooking had a monthly audience of about 10 million unique users.

NYT Cooking was formed in 2014 as part of NYT Beta, the company's product development group. Beta has also launched Watching, the publisher’s TV and movie guide, as well as Real Estate, Well, Smarter Living and Crosswords.

NYT Cooking was free until June, though for now, existing New York Times print and digital subscribers get unlimited access to the Cooking product.