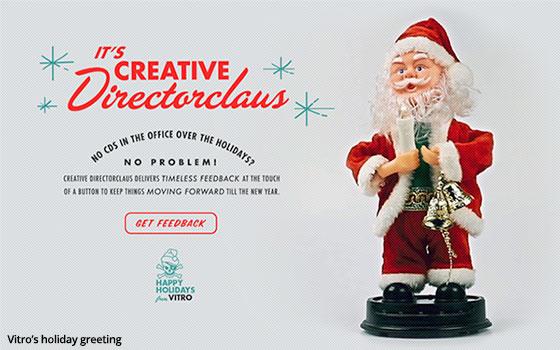 Along with last-minute shoppers, agencies are revealing their last-minute holiday greetings. Here’s a sampling.

22squared introduces what the agency calls the first-ever, social holiday, tap-through sing-along that transforms Instagram Stories into a collaborative musical instrument using the tap-through function. The Tappy Holidays project invites users to tap-along to their favorite holiday tunes, and donate to the advocacy group Education Through Music.

To elicit support for the initiative, the agency culled employees from all departments -– including CEO Richard Ward -– to participate in a sing-along that uses snippets from each person to create the full holiday song.

Horizon Media gave every employee in its New York and Los Angeles offices $10 to engage in a Random Act of Kindness. Some gave to the homeless, while others donated to charities. Staffers were then encouraged to share their donations across social media using #HorizonActsofKindness.

Vitro is helping agencies whose creative directors are on vacation by introducing "Creative Directorclaus," a virtual Santa who delivers witty statements when clicked or touched online. Some of his thoughts include the desire to film anywhere other than Prague and that he "doesn't do that Power Point thing."

Barker has launched a "Last Minute Gifter" microsite for those who put off buying for the office gift exchange until the last possible second. Users answer a few questions about the gift recipient, based on factors including a $20 spending limit and their office behaviors. After answering about a coworker who likes to eat leftover food, for instance, the platform recommends the telescopic extendable long handle fork. The gifts all allow for Amazon Prime one-day shipping.

Austin-based agency Drumroll is helping three local families rather than engaging in the typical card experience this year. The agency realized the foster kids in the actual centralized facility receive the most attention around the holidays, but the surrounding area families that foster kids don’t receive nearly as much assistance.

As a result, the agency is gifting one family without enough beds an entire room makeover while another family with special-needs children will receive a sensory appropriate room.

Wunderman New York is raising awareness for client Animal Care Centers of New York by covering the adoption cost of anyone who mentions the hashtag #Seasonstweetings during the holiday season. In addition, the agency custom built a dog-friendly keyboard synced with Twitter to enable a few dogs to have total control of its Twitter feed. Each key featured a classic holiday greeting so the end results ended up with a jumble like "Mistletoe Yule Jingle Yule Festival of Lights Ho Ho Ho Boroughbred."

This year, Arnold Worldwide created a video that encourages clients and partners to support children in need with their desired holiday gifts. The Arnold creative team developed personal logos for each kid and the final creative work included a "highly targeted media" buy that included one child's "guerrilla street art" and another's billboard. The video closes with a call for card recipients to sponsor a child or donate to Youth Villages Holiday Heroes program.

Brunner is celebrating Christmas, Hanukkah, Kwanzaa and Boxing Day with “The Ultimate Holiday Commercial” that recognizes the diversity of the holidays. The spot-within-a-spot ends with a festive photo of Brunner staff and the message, “at least we nailed the sincerity part.”