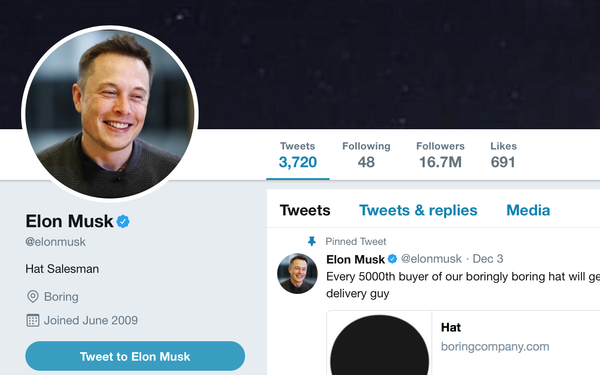 There are many people who hang on Tesla Founder Elon Musk’s every word. More than 16.7 million (and counting) on Twitter, for starters.

The tweet was directed at a Facebook executive, but Musk sent the message to all of his followers. Think now-imprisoned ex-U.S. Rep. Anthony Weiner and the infamous underwear photo. Except this was just embarrassing and not lewd.

The tweet was quickly deleted, but not before many of his followers took note.

Some media organizations are reading between the lines, speculating that the tweet, to Oculus Chief Technology Officer John Carmack asking to schedule a meeting, might imply that Musk is courting Carmack for a job. Oculus is the VR headset company acquired by Facebook in 2014.

Carmack tweeted out an explanation for why the two would be in touch. “I spent over a decade building rockets, and founded the Commercial Spaceflight Federation alongside [Musk],” he said.

Those who have called the number report that the voicemail message is a message recorded by Playstation game God of War creator David Jaffe. It's one of two secret recordings that can be found by calling phone numbers hidden in the game. "By the Gods you've done it," the message starts. "Somehow you've found your way here to me. I offer you my congratulations and my respect.”

At least one news organization is having some fun with the story. Jalopnik writes that the auto website’s Ryan Felton has texted Musk "asking why he’d tweet out his phone number, for updates on the Tesla Model 3 and where the Tesla semi truck will be built. He has not responded yet. We will, of course, update the post when he inevitably does."

Given that Tesla executives rarely give interviews, starting with Musk, this is unlikely.