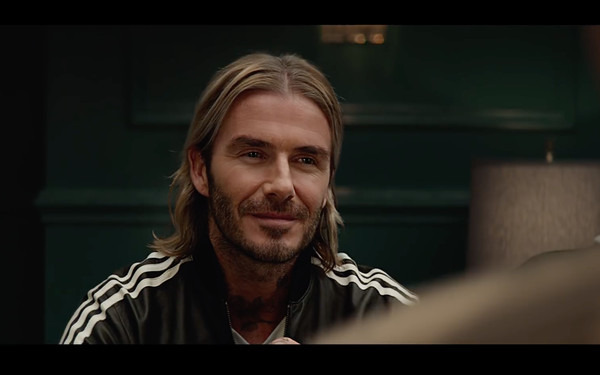 Give Adidas credit for a bold decision: Its new “Calling all Creators” campaign skips the obligatory athletic energy of football fields and basketball courts for a boring old conference room, summoning all its endorsers for a sit-down on why creativity matters.

While not every voice is heard — soccer legend David Beckham just nods knowingly, for example — the faces are all familiar, including Pharrell Williams, Aaron Rodgers, Karlie Kloss, James Harden and Alexander Wang.

While it’s a probably a little more high octane than your typical staff meeting, it’s still not your usual Adidas ad, either. (Its earlier “Calling all Creators” spot has more cardio.) “Sport happens before, during and after the field of play,” Adidas’ Ryan Morlan, vice president of global brand communications, tells Marketing Daily in an email. “We set out to make a statement about sport culture and bringing together a diverse group of creators who are shaping it.”

The spot invites viewers to join them at the table, rather than on the field: “Pull up a chair,” says NFL star Von Miller.

Morlan says the spot aims is to go beyond sport, and tap into its roots in fashion, music and design. “That’s why we feel Adidas is the only brand that can unite such a diverse group of creators.”

And in the under-the-table toe-tapping action, Adidas shows off Boost, its new cushioning technology; shoes crafted from Parley Ocean Plastic, made of recycled marine trash, and Futurecraft 4D footwear.

The ad, made by 72AndSunny, is set to break first in movie theaters this weekend, before screenings of Star Wars, Jumanji and Pitch Perfect 3. It’s then scheduled to run during NBA Christmas games, as well as during college basketball and football games, then during NFL and NHL programming.

One thing Adidas won’t be creating, though, is new wearable technology. A spokesperson confirms reports that it’s bailing out of the wearables business, shuttering its digital sports organization. Instead, it will “consolidate the Adidas app eco-system, focusing our efforts on our two most powerful brand platforms: Runtastic and the Adidas App. We are integrating digital across all areas of our business and will continue to grow our digital expertise in a more integrated way.”

Rival Nike discontinued its Fuelband in 2014. And Under Armour has also backed away restructured its digital approach, with key execs exiting the company earlier this month.