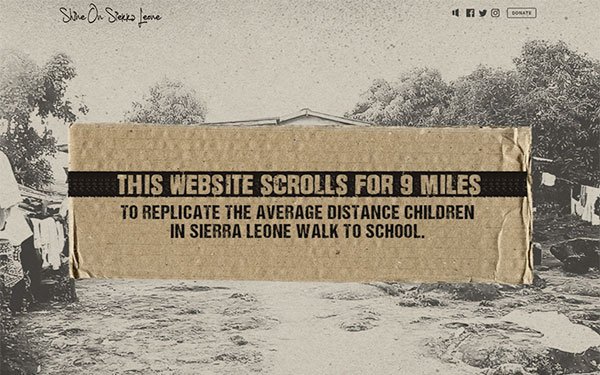 David & Goliath (D&G) is lending its talents pro bono on behalf of the nonprofit Shine On Sierra Leone to increase donations for the organization that builds schools for the country's students.

The "9 Mile Scroll" concept is designed to illustrate how far children walk to school in the West African country of Sierra Leone. It will take users the same time it takes students — three to five hours — to fully complete their nine-mile scroll. Their journey from the village to the school is similar to the children's experience, such as dirt roads with dangerous snakes and monsoons.

The agency's efforts include the 9milescroll.com website, out-of-home posters, billboards and an Instagram initiative that features nine influencers — including Zoe Kravitz (@zoeisabellakravitz), Rosario Dawson (@rosariodawson), Nura Afia (@nuralailalov) — who tagged each other consecutively in one of the nine miles of the children’s journey.

Ultimately, the goal of the campaign is to drive donations in order to raise enough money to build another school closer to the children’s homes. "These kids' courage was the catalyst for inspiring people across the world to gain strength through adversity," says Kristen Knape, D&G’s director of philanthropy.

This is a passion project for agency founder David Angelo after a mutual friend introduced him to the nonprofit's founder Tiffany Persons. D&G's initial project with Shine On was interrupted in 2014, due to the Ebola crisis that shut schools down across the country. This situation inspired the agency to create a motivational program that turned into a global movement and eventually transformed into the nonprofit, Today, I’m Brave.

While it remains to be seen whether people will scroll through the entire multiple hour journey, this isn't the first campaign to test the strength of viewers.

In 2014, Virgin America and its agency Eleven introduced the Radical Departure campaign that recreated with puppets a five-hour and 45-minute flight on Blah Airlines to represent the mundane flight experience offered by the mainstays of the airline category. The entire experience was streamed via YouTube and supported across social media.