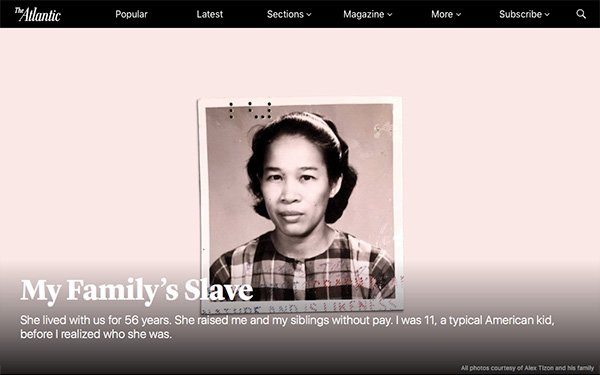 The Atlantic magazine's cover story “My Family’s Slave” topped the list of Chartbeat’s ranking of the 100 most engaging stories of the year.

The story, written by the late journalist Alex Tizon, recounts his life with his family’s secret slave, Eudocia Tomas Pulido, known as Lola. It was read for 58 million minutes, or 110 years, according to Chartbeat, an analytics platform. That’s triple the engagement of any other article on this year's list.

Tizon died suddenly at the age of 57, just a few weeks before the story’s publication in the June 2017 issue.

"People value story, great writing and honest emotion. When we published Alex Tizon’s piece, we were at the beginning of the Trump presidency, and Trump was seemingly the only thing on everyone’s minds," stated The Atlantic editor-in-chief Jeffrey Goldberg.

"I had no idea that a tragic, very personal story by an esteemed but not particularly well-known writer would connect in such a dramatic way. But we learned that the marketplace still rewards quality," he added.

Articles from The Atlantic account for 20% of total engagement of the top 50 measured by Chartbeat.

No. 2 on the list is ESPN's "I Just Wanted To Survive," a story on the kidnapping and torture of University of Rochester football player Niko Kollias, written by by Tisha Thompson and Andy Lockett.

The rest of the top 10 range from news stories on the Las Vegas shooter from CNN and The New York Times to the Times’ investigative piece on Harvey Weinstein’s decades of sexual harassment, written by Jodi Kantor and Megan Twohey. That article set off an avalanche of stories on the sexual misconduct of men in the media, as well as in politics and Silicon Valley.

Other themes of this year's most engaging stories, according to Chartbeat, were articles that “connect readers deeply to the humans portrayed," such as President Trump’s first year in office, terrorist attacks and shootings, hurricanes and other natural disasters, and the impact of technology on mental health.