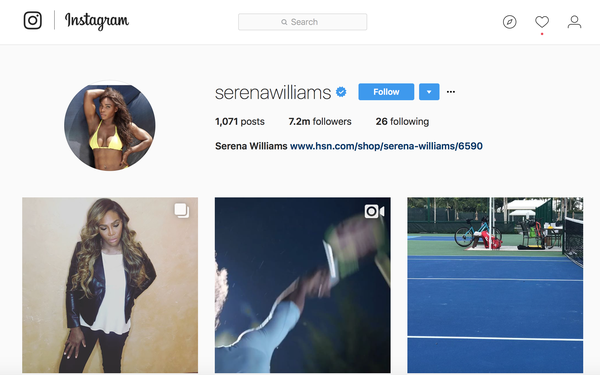 Tennis champion Serena William is the most marketable athlete of 2017, and her older sister Venus holds the second position, according to Nielsen.

The ranking is based on Nielsen’s N-score talent tracker which assesses the endorsement and casting potential of actors, athletes, musicians and other celebrities in the U.S. Nielsen’s N-score accounts for awareness and likeability, and 10 other attributes such as: “influential,” “role model” and “trendsetter.”  N-Score values range from 1 to 100.

After winning the Australian Open in January, Williams revealed that she was eight weeks pregnant during the competition. With an N-Score of 83, she topped all professional athletes in 2017 in the N-Score Talent Tracker, even after taking maternity leave and sitting out the remainder of the year.

Williams has more than 22.6 million social media followers and was the highest paid female athlete in 2017, according to Forbes. Intel was among the newest organizations to sign endorsement deals with Williams, joining brands like Beats by Dre, Gatorade, JPMorgan Chase, Nike and Tempur-Pedic.

Williams’s sister Venus landed in the No. 2 spot on the list with an N-Score of 79, up three points for the year, compliments of a comeback tennis season. Venus Williams has more than 4.8 million social media followers and endorsements with Electronic Arts, Kraft, Ralph Lauren, Tide and Wilson.

LeBron James (N-Score 76) led the Cleveland Cavaliers to their third straight NBA Finals appearance in 2017, and he leads all U.S. athletes in terms of brand marketability via social media with more than 96.9 million social media followers. Like Serena Williams, James added Intel to his list of endorsement contracts, which also includes a $1 billion lifetime contract with Nike and deals with Beats by Dre, Coca-Cola, Kia Motors and Verizon.