For TV In 2017, Trump Was Disrupter In Chief 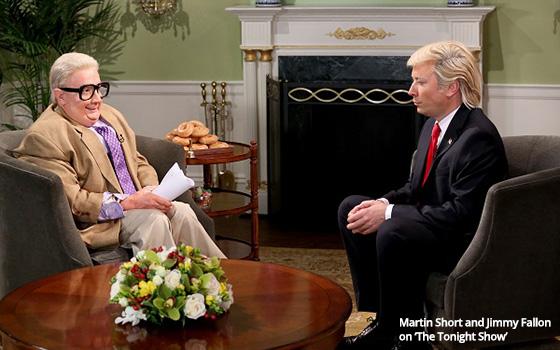 In all sorts of areas in our technological, social and economic lives, so-called “disrupters” are pop-culture idols these days.

And yet one disrupter is not idolized at all -- one Donald J. Trump. Since he took the oath of office last January, he has been a disruptive force in so many spheres both foreign and domestic.

And yet he is not regarded adoringly as a disrupter by the same people who worship the disrupters who upend traditional industries and then give TED talks in which they brag about it.

In television in 2017, Trump was the disrupter in chief. It sometimes seemed as if entire segments of the TV industry were suddenly retooled to accommodate him.

This was especially true in cable news and late-night TV. It might not have seemed possible, but the three principal cable news channels -- Fox News Channel, CNN and MSNBC -- did an even worse job this year of reporting the news of the world than ever.

It was as if the news channels were not in the news business at all. Instead, like moths to a porch light, they flocked to the Trump story as if nothing else in the world mattered.

And from their point of view, maybe nothing else did matter. Somehow, they had come to the conclusion that Trump was the only topic their audiences cared about.

As a result, except for the occasional “big” story that they were obligated to cover (such as the year's natural disasters and terrible mass shootings), the news channels expended most of their efforts in 2017 to reporting on Trump -- or more to the point, not so much reporting on him as yakking incessantly about him.

As anyone knows who understands the TV news business, it is much more economical to put on silly talk shows in a studio every night than to actually go out with correspondents, crews and equipment each day to all four corners of the Earth in order to produce content that will feed a continuous “news wheel” 24 hours a day.

In that respect, it's understandable why we don't really have a genuine 24-hour news service on cable TV, although it would be nice.

Late-night TV's comedy assembly line was also reconfigured for the Trump era in 2017 -- so much so that the attention paid to the Trump administration by the late-night shows is credited with reordering the entire hierarchy of weekday late-night.

The conventional wisdom about Stephen Colbert's rise to the No. 1 position was that he either did more Trump satire or he did it better than Jimmy Fallon and “The Tonight Show.”

In scores of TV columns over the past year, this was the gospel put forth by critic after critic -- none of whom likely considered doing the hard work of actually quantifying the number of jokes or bits about Trump that either Fallon or Colbert produced in 2017.

I didn't undertake such a count either. All I know is, almost every time I took a look at either one of them on any given evening, there they were joking about Trump.

The photo above with Fallon as Trump and Martin Short as celebrity interviewer “Jiminy Glick” was typical of what you would see almost any time you tuned in to either Fallon or Colbert this year.

Who really knows who did more? The important thing is: In this first year in office, Trump disrupted cable news and late-night TV. What's he going to upend in 2018?