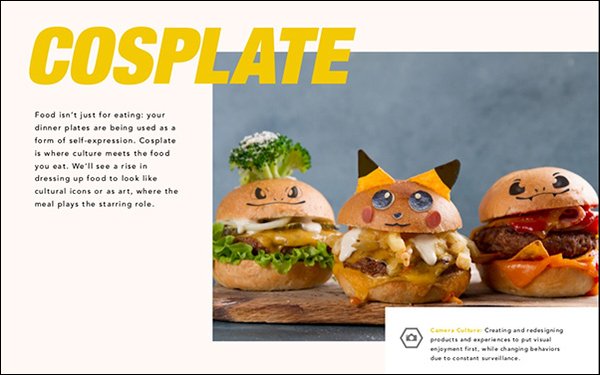 Sparks&honey has released its annual trend forecast predicting that 2018 will usher in a year of “cultural shifts.” They include transit cars offering manicures and dressing up food to mimic animals and people.

The report offers some observations on retail reinvention and artificial intelligence; it delves into how the confluence of polarization, accelerating technological advancement and evolving social norms are playing an outsized role in the year ahead.

As many Millennials and Gen Zers continue to put off marriage, the Omnicom-owned agency believes 2018 will introduce the “Me Milestone” trend, in which people celebrate individual moments in their lives, such as landing a new job.

It remains to be seen if brands will launch registries specific to these individual moments, but it is likely that more advertisers and brands will participate in Alibaba's Singles Day, known as the biggest ecommerce day in the world, when people celebrate their independence by purchasing their own products on November 11.

Following this year's movement for inclusiveness, ageism will continue to be a hot focus for advertisers and brands as messages shift away from trying to be younger forever in favor of embracing and living a fuller and maturing lifestyle. CoverGirl and agency Droga5, for instance, recently introduced advertising with 69-year-old Maye Musk. L'Oreal and agency McCann continue to feature brand ambassador Helen Mirren.

Another topic gaining more notice: the plus-size market via the 67% Movement. One notable question, however, is whether this plus-size shift will expand to the men's market. There has yet to be oversized male models walking down the runway.

Also, given the on-going Harvey Weinstein fallout, via what the agency calls the “Detoxing Masculinity” movement, we may see playing down a male-dominated culture and viewpoint.

Catastrophe response will also gain attention as brands, advertisers and companies wrestle with how best to leverage their talents to help storm recovery in what the agency calls "disaster design." This fall, 22squared, for instance, created 'Irma Gives Back' to help victims of Hurricane Irma, the largest Atlantic storm in recorded history.

Climate change will help foster the “extinction tourism” trend, in which travelers increasingly seek out extraordinary and exotic destinations, such as Antarctica. Expect brands to introduce messages based around “Armour Therapy,” designed to help ease concerns about the unpredictable and unstable world.

Among the 90 predicted trends, others include asynchronous meals -- people eat food beyond the traditional breakfast, lunch and dinner -- Kidults, where kids act like adults and adults act like children; and Mass Upscaling, which has brands introduce more luxury-priced offerings.

Check out the full report here.