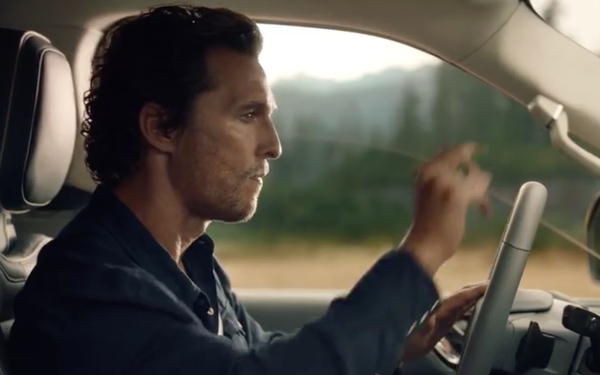 The spot, created by Hudson Rouge, was shot in the Pacific Northwest by cinematographer Wally Pfizer. It opens with a distant shot of the Navigator driven by McConaughey, who pulls up to a railroad crossing and stops, although there no train is in sight. He soon becomes both the conductor and lead musician of an impromptu concert.

The campaign breaks today with a 60-second spot on Lincoln’s Twitter and YouTube channels and will then air during the Jan. 1 College Football Playoff as a TV ad. A second spot will air later in the month.

The mood of the piece is a perfect complement to the Navigator, said John Emmert, group marketing manager, The Lincoln Motor Company.

“Perfect rhythm refers to the feeling you get in those situations when everything comes together,” Emmert said in a release. “This piece is all about energy. You see Matthew in control. He starts a rhythm and it builds, and he becomes the master of his experience. We’ve overlaid a complex sound design as a freight train enters the scene and rumbles by. There’s this wonderful crescendo of light and sound that builds and then ends as suddenly as it begins.”

The exterior shots in the ad show the Navigator’s signature front grille, while the interior shots highlight the spacious cabin and its serene, horizontal styling.

McConaughey brings it all to life, he says.

“Short-form art requires doing a lot in a very short amount of time,” Emmert said. “That’s especially true if you want to convey something emotional, which is the core of our brand. Matthew can communicate so much, so fast, it’s amazing."