Small algorithm updates happen almost daily, while major ones can bring on great stress for those search professionals who must implement them.

In fact, 51% of search engine optimization (SEO) professionals feel stressed or unsure how to react when a Google algorithm update occurs, according to data from BrightLocal. 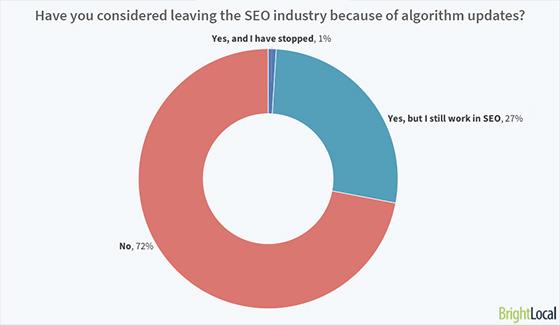 BrightLocal asked the 44% who had been impacted in some way to describe the changes and the level. About 35% said updates don’t concern them, but 25% said the updates make them feel stressed when they hit. About 26% said they struggle to know how to react.

"This culture of stress and uncertainty is worrying for the industry, meaning a major change could have a negative effect on the health and happiness of digital marketers," according to the findings.

Despite all the stress, 23% reported feeling excited by the challenge. A major change such as those seen with the algorithms Penguin, Possum and Pigeon can make the job more interesting.

Answers are the one major element missing to make the experience positive, according to the findings. Google often fails to provide the proper direction.

For those SEO professionals with the knowledge to make the changes, the updates can provide a key opportunity to attract new business. About 26% said they acquired new clients during an update, and 23% grew existing accounts.

The findings suggest that "major" Google algorithm updates add an extra nine hours of work for the average SEO professional in the first week, worth approximately $1,242 per employee.