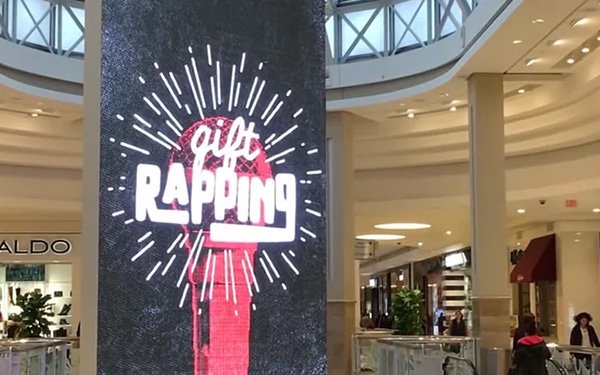 Like a lot of agencies, Washington-area ad shop White64 is always looking for the next new thing and that includes how to express a little holiday cheer each December.

This year the agency came up with the idea gift “rapping.”

The basic idea was to find a freestyle rapper, set them up at a mall kiosk in the Washington, D.C. area near the agency's offices, and have them create customized “freestyle gift raps” that shoppers could share with family and friends via social media.

The execution hinged on finding the right talent and the agency found Harry Mack, the California-based freestyle wrapper, who was trending big time after his recent appearance on the Ellen Show, hosted by Ellen DeGeneres.

The agency contacted him and he signed onto the project, provided there was a charity component to the concept. So the agency teamed with Second Story, a local charity focused on empowering youth from under-served communities.

With Mack on board, White64 worked up a comprehensive social media plan that would amplify exposure to the event beyond those present at the mall.

Last weekend, Mack hit Tysons Corner Mall in Virginia and gave the gift of rapping. The agency captured his freestyle flow in a series of “snackable” videos.  A site experience enabled “gift rap” recipients the ability to view and download their customized content.

While Mack was rapping Second Story staffers were wrapping—actually wrapping gifts for a fee—at a nearby kiosk. All funds raised by Second Story at their wrapping booth went to the charity’s coffers. White64 also created a freestyle rap video of Harry promoting the charity.