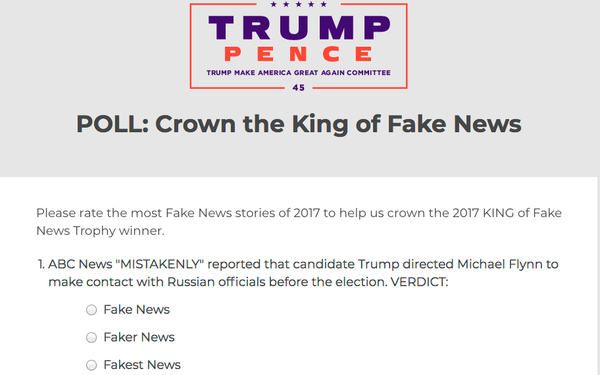 A month ago, Donald Trump tweeted “we should have a contest as to which of the networks, plus CNN and not including Fox, is the most dishonest, corrupt and/or distorted in its political coverage of your favorite President (me).” Now, Trump’s reelection campaign committee has launched a poll asking its email marketing list to vote to “Crown the King of Fake News.”

Never mind that an objective third-party pollster, conservative-leaning Rasmussen Polls, already conducted a survey finding that Fox News was deemed the “Fake News” champ by a wide margin over any other news organization.

The Trump Make America Great Again Committee began contacting email list subscribers this week to participate in the poll, which prompted them to rate three news organizations, based on erroneous news stories about Trump: ABC News, CNN and Time magazine.

The first two organizations acknowledged their initial reports about Trump were incorrect and immediately corrected them. The reference to Time magazine was not published by the magazine, but was an inaccurate tweet by one of its writers that Trump had removed a bust of Martin Luther King Jr. from the Oval Office. The reporter acknowledged his mistake and apologized for it.

The poll did include one open-ended field inviting its list to “Let the President know if there is another story you think should be crowned as the 2017 KING of Fake News.”

It was not clear whether, when or in what form, Trump’s campaign committee will publish the results and award a trophy. But after completing the survey, it thanked respondents for participating in the poll, asserting, “The mainstream media have been rooting for President Trump to fail and misleading the American public for far too long. Today we’re fighting back!”

It then asked them to make a “contribution to help get the truth past the media filter and straight to the American people.”

The site’s fine print said 75% of each contribution would be designated toward either the committee’s 2020 primary or general election account.

The committee has already spent more than $1 million of its contributions on legal fees to defend against the Russia investigation, according to reports by various news organizations.