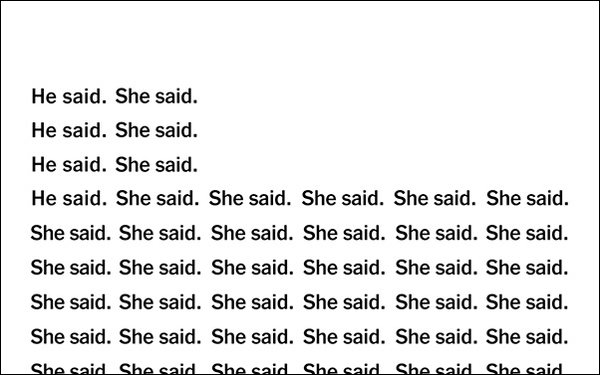 Set to debut during the Golden Globes Sunday night, the latest installment of The New York Times’ “The Truth is Hard” ad campaign focuses on its in-depth reporting of sexual harassment in the entertainment industry and beyond.

The newspaper, which broke the Harvey Weinstein sexual-harassment story last October, debuted the first in the series of ads, which focused on the necessity of trustworthy journalism, during the 2017 Academy Awards.

The latest ad will include broadcast, print and digital, running both in paid media and on its own platform. The campaign speaks to the power of accountability and centers on a message of “the truth has power, the truth will not be threatened and the truth has a voice.”

The simple, yet bold broadcast ads feature a “He said. She said” repetition, before cascading into tens of “She Said”s across the screen, revealing the chorus of voices given a platform by Times' reporting.

Banner ads include phrases such as “Stories that shatter silence” and “Coverage that confronts the status quo,” before promoting a link to one of the notable stories from the paper.

These articles and others helped spark reform within the industry and empower movements like #metoo and “Times Up.”

Newly appointed New York Times publisher A.G. Sulzberger stated, “This groundbreaking work has been called some of the highest impact reporting of our time.” He pledged the paper “will continue to provide our journalists with the time and support they need to hold powerful people to account and pursue the truth without fear or favor.”