Amazon Looks Beyond Football As It Targets More Live Sports 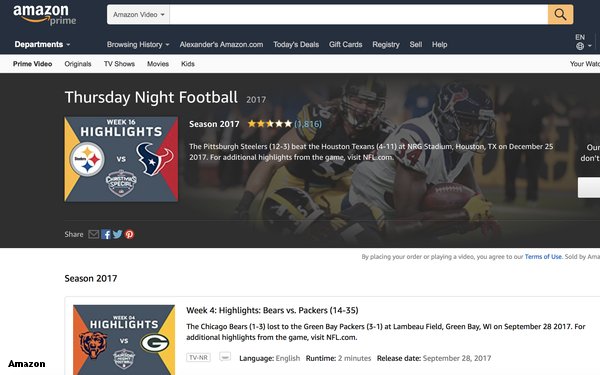 Technology giant Amazon is in talks to bid on UK rights to Premier League soccer games, a move that would ramp up the company's investment in live, ad-supported sporting events.

In the U.S., Amazon's simulcast of NFL "Thursday Night Football" games, and the hiring of an executive dedicated to securing sports video rights last year suggest that the company is just getting started in that field.

Amazon's Premier League bid was first reported by the UK newspaper The Telegraph, which added that the rights would run from 2019-2022, and that the company was talking to others in the sports video space to determine what it would take to broadcast the games. In the UK, Amazon also last year won the rights to stream the U.S. Open tennis tournament, as well as some other tennis matches.

The aggressive move into live sports is notable for a few reasons.

First, it represents a major push into ad-supported video. Amazon's Prime Video service remains ad-free, and the company only added its first ad-supported network to Amazon Channels this week, in the form of CBS All Access.

For its NFL simulcasts, Amazon runs a full commercial load, much like the games that air on NBC and CBS. Premier League soccer games don't typically have the same commercial breaks that NFL games do, but do typically feature advertising before and after the game, and in branded graphics during games.

The push for live sports also serves as a differentiator against competitor Netflix, which not only spurns advertising, but live programming in general.