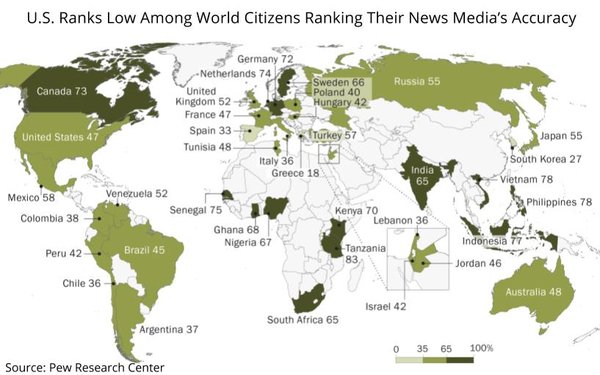 The U.S. ranks relatively low -- between Jordan and Tunisia -- among world citizens ranking the accuracy of their news media in reporting political issues accurately, according to a global study released this morning by the Pew Research Center.

A minority of 47% of respondents in the U.S. said they felt their news media were doing very or somewhat well in the accuracy of reporting political issues.

The lowest response came from citizens of Greece (18%). The Philippines and Vietnam tied for the highest response, 78%.

The median was 52% among the 38 nations polled.

The survey, conducted in the Spring of 2017, also found that digital media is having a pronounced effect on the way people consume news globally. Overall, a median of 42% among the 38 countries surveyed say they get news on the internet at least once a day. In 14 countries, half or more adults get news online daily.

Internet access has been shown to be higher in wealthier countries, and Pew found this plays out to a greater likelihood of using the internet for news as well.

The survey also asked a separate question about how often people get news specifically on social media sites.

“Unlike getting news on the internet generally, the percentage that gets news on social media is not strongly related to country wealth,” Pew found, adding, “In fact, the median percentages of people who get news at least once a day through social media are about the same in emerging and developing economies as in advanced ones (33% and 36%, respectively). Overall, a global median of 35% get news daily through social media, with the highest levels in South Korea (57%), Lebanon (52%) and Argentina (51%).” 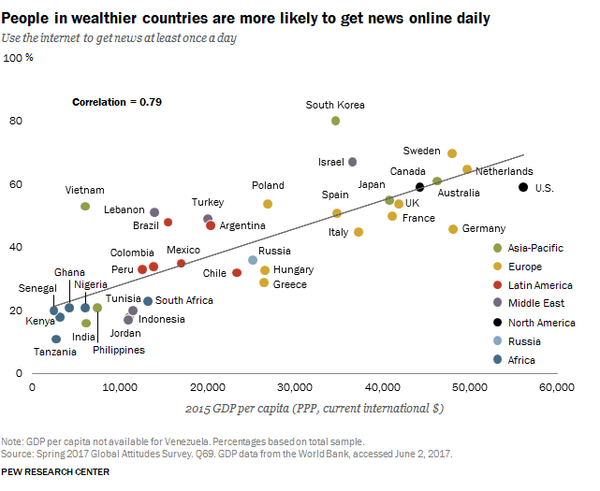