Media-Buying Continues To Migrate In-House Thanks To Programmatic, 'Control' Is No. 1 Reason 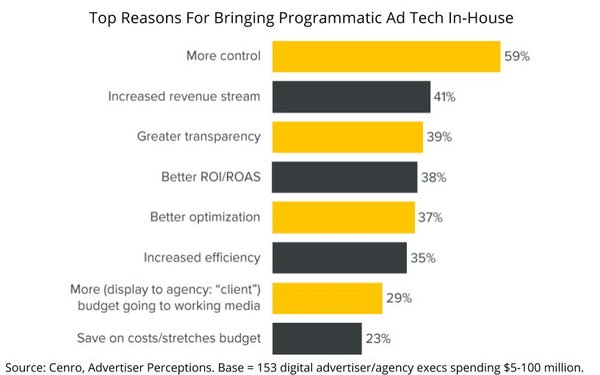 Media-buying will continue to migrate “in-house,” thanks to programmatic ad technology, and the No. 1 reason is “control,” according to the results of a survey of advertisers and ad agency executives being released this week by digital media-buying technology firm Centro.

The study, which surveyed 153 ad execs late last summer, found that 81% of marketers plan to bring at least some of their programmatic advertising in-house over the next 12 months, while 59% said they will no longer outsource their programmatic media-buying to a third party by next year.

The survey also reveals that programmatic media-buying is driving a wide range of marketplace models. But overall, the growth is going to so-called “private marketplaces” (cited by 39% of respondents) and open RTB (30%).

Despite the growth of biddable media models, nearly two-thirds (63%) of the respondents said they are leveraging programmatic ad technology mainly to automate conventional “direct” insertion order-based media buys and ad requests from their digital media suppliers.

advertising, media buying, programmatic
1 comment about "Media-Buying Continues To Migrate In-House Thanks To Programmatic, 'Control' Is No. 1 Reason".
Check to receive email when comments are posted.
Next story loading