The Conundrum of Choice 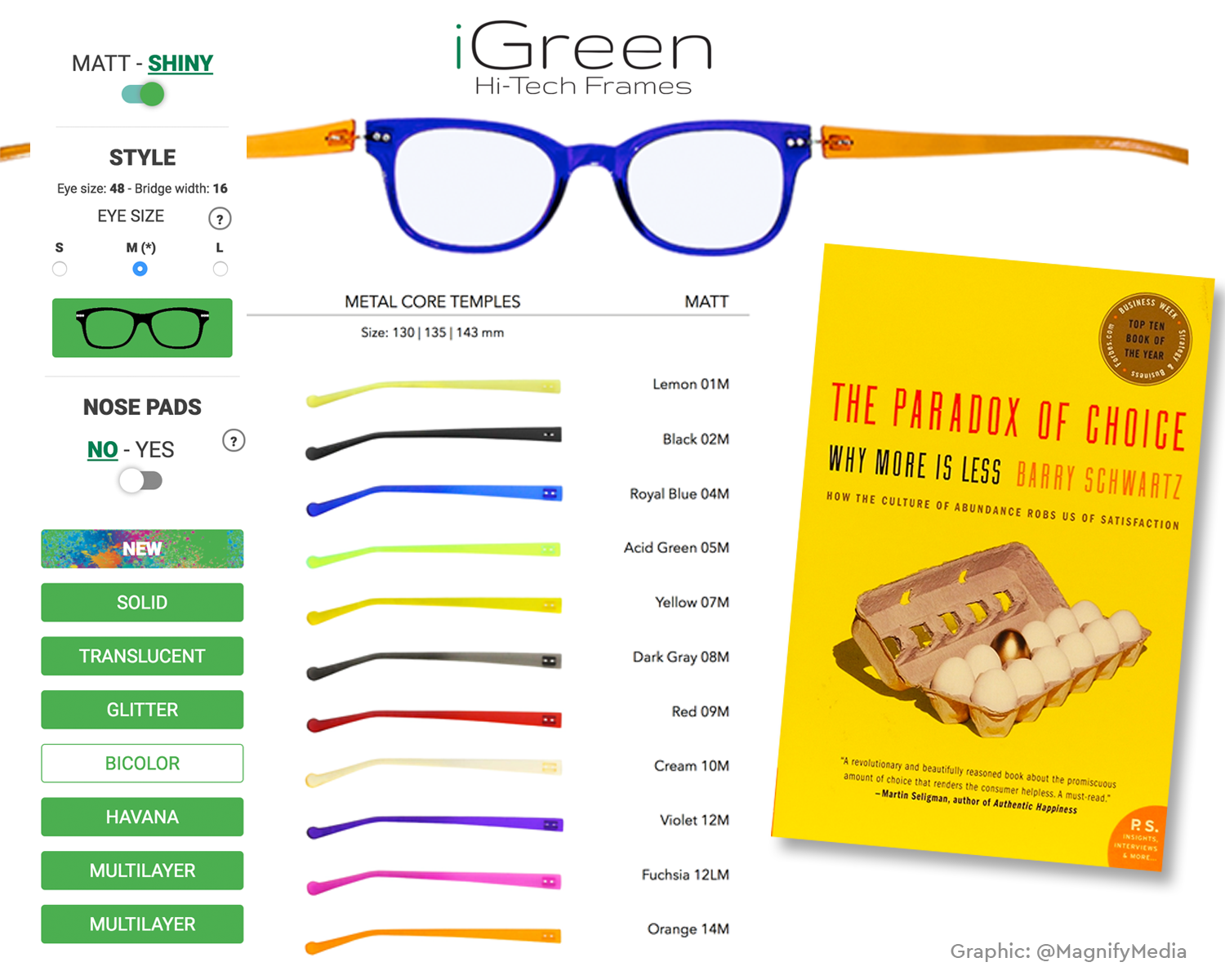 My wife and I spent some time on a Saturday afternoon shopping for eyeglasses. There are some things that just can't be shopped for online, glasses being one of them. You need to try them on, see how they feel, and get feedback from both the hopefully honest optician and whoever you’ve brought along as your trusted fashion advisor.

On this trip, I was the advisor. After some searching, my wife found a pair she liked. “Good news!” the optician said. "That’s a new company we’re representing.” The glasses were called iGreen Hi-Tech Frames. Not to be confused with “iGlasses,"  a name owned by Apple for reasons one can only surmise.

iGreen glasses aren’t manufactured, they are 3D printed, we were told. And while the store had a hundred or so frames and colors, no worry if you didn’t like those choices -- there were thousands more online  to choose from. I watched my wife slip into a sea of overwhelming choice.

"And there’s more,” the optician preached, now on a roll. “We’ve got hundreds of interchangeable temples,” he explained -- those are the arms that hold the lens frames to your head and ears, we learned. The colored temples were just $29, so you can customize your frames to match your shoes, or to celebrate an occasion. “Pink for Breast Cancer Awareness Day,” the optician explained. “Green for St. Patrick's Day.”  You could even snap them on magnetic sunglasses.

This was the future of optometry: unlimited variation, glasses customized to be one of a kind.

I couldn’t help but think of Barry Schwartz, a psychologist and author whose TED Talk, “The Paradox of Choice,”   asks some complicated questions. Just because we can offer a product in a myriad of variations, does that choice provide consumers with helpful options -- or, at some point does it shift the role of creating taste, style and function from brands to the consumer?

In the case of glasses, unlimited customization teeters on the brink of an awesome set of options and an overwhelming cornucopia of choices.

Schwartz’s argument postulates that an abundance of choice, instead of increasing our sense of well-being, is increasing our levels of anxiety, depression, and wasted time.

I was in the audience in Oxford, England, when Schwartz gave his talk. It’s now been seen more the ten million times on the TED website.

The talk was powerful -- and prophetic.

"I want to say just a word about salad dressing,” said Schwartz. "175 salad dressings in my supermarket -- if you don't count the 10 extra-virgin olive oils and 12 balsamic vinegars you could buy to make a very large number of your own salad dressings, on the off chance that none of the 175 the store has on offer [will] suit you. So this is what the supermarket is like."

What he observed then, and predicted, was an era of runaway, unbridled choice -- choice that exceeds a human being's ability to absorb and determine what is "best."

"All of this choice has two negative effects on people," said Schwartz. "One effect, paradoxically, is that it produces paralysis, rather than liberation. So paralysis is a consequence of having too many choices. Second, when there are lots of alternatives to consider, it is easy to imagine the attractive features of alternatives that you reject that make you less satisfied with the alternative that you've chosen.”

Schwartz sounded the alarm that too many options could have terrible consequences. "Clinical depression has exploded in the industrial world in the last generation,” said a now serious Schwartz. "I believe a significant -- not the only, but a significant -- contributor to this explosion of depression, and also suicide, is that people have experiences that are disappointing because their standards are so high, and then when they have to explain these experiences to themselves, they think they're at fault.”

Back to our optician and my wife’s thousands of choices of colors, patterns, and combinations for iGreen glasses. What did we do? We said thanks and headed out of the store. Tomorrow we’re going to look at more stores, and more glasses. Why? Because somewhere there's the "perfect pair" -- and we’re determined to find them, or at least try.

Damn. When does "so much" become "too much"?  That might be right about now.

consumer experience, marketing
1 comment about "The Conundrum of Choice".
Check to receive email when comments are posted.
Next story loading