Alphabet-owned Google is scheduled to complete three underwater cables in 2019 in an effort to expand its cloud business worldwide. The move will provide more support to companies using cloud services, including advertising agencies and the brands they support. 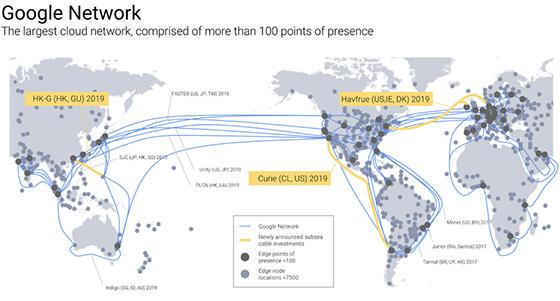 Google will commission the work. The first of the three submarine sea cables will run from Los Angeles, CA to Chile. The second cable will connect the U.S. to Denmark and Ireland. The third will connect Hong Kong to Guam.

The plan is to open offices in the Netherlands and the Montreal, Canada regions in the first quarter of 2018, followed by Los Angeles, Finland, and Hong Kong, with more to come, before completing the project, wrote Ben Treynor Sloss, vice president of engineering at Google, in a blog post.

In 2008, Google invested in a subsea cable as part of a consortium that linked the cable from the United States to Japan. The cable, dubbed Unity, was intended to address the need for broadband for data and internet traffic between Asia and the U.S. At the time, the project would add up to 7.68 Terabits per second (Tbps) of bandwidth across the Pacific.

The move would put Google -- which has invested $30 billion in infrastructure during the past three years -- in a better position to compete against Microsoft and Amazon.

In 2016, Microsoft and Facebook announced they would lay a cable across the floor of the Atlantic Ocean in an effort to improve internet services. The project, known as MAREA, was scheduled for completion in October 2017.

On Tuesday, Amazon announced an expansion of its cloud partnership with Comcast to deploy new applications on Amazon Web Services. Comcast’s primary businesses,  and , currently run on AWS.