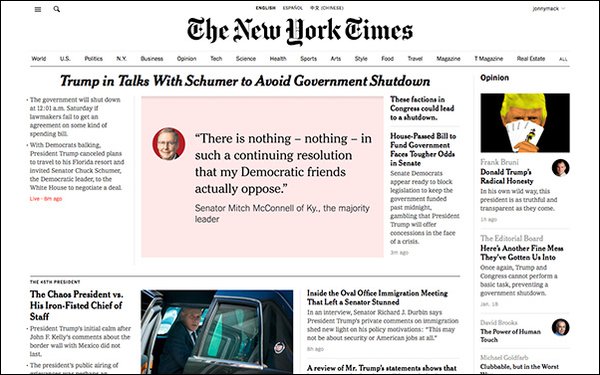 Coming out ahead in this year’s Momentum Awards from SimilarWeb are The New York Times and Fox News, which both saw impressive traffic increases from 2016 to 2017. Politico was also recognized.

The winners are selected by the SimilarWeb ranking system calibrated in-house by analysts using insights obtained through SimilarWeb’s web, mobile and learning sources.

SimilarWeb’s site revealed the rankings, showing The New York Times increasing overall traffic by 10% during 2017. Foxnews.com increased direct traffic by 17% in 2017, with 55% of its traffic coming directly to the site.

Politico maintained its numbers from 2016 with a high percentage of its readers coming from both direct traffic and referrals from social media and other new sites.

SimilarWeb notes that 2016 was a year when many news sites saw an uptick in traffic because of the election, a trend the company speculated would be difficult to maintain. However, these three brands found a niche in news reporting that landed them ahead of competition.

The company notes that all of its news and media winners decreased their reliance on social media during 2017, something that may have contributed to their success in the digital sphere.