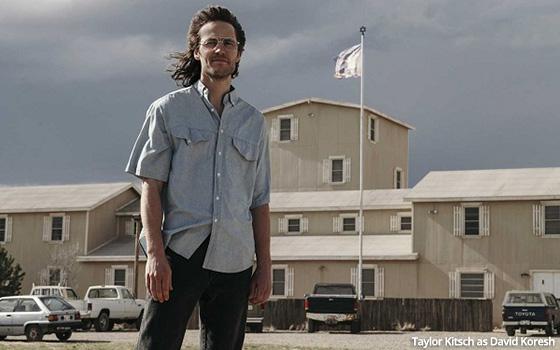 No sooner did the Spike network change its name to Paramount than the quality of the network’s content suddenly shot upwards.

Time will tell whether the network’s miniseries about the 1993 siege of Waco, Texas -- at the conclusion of which the home of the Branch Davidians was set ablaze -- will be typical of the new network’s offerings or if it will represent some sort of rare exception.

At the moment, it would appear exceptional, but the rebranding of Spike -- best known for unscripted shows such as “Bar Rescue” and “Ink Masters” -- happened only last Thursday.

This week, starting on Wednesday, the new Paramount will introduce “Waco,” a six-hour, six-part scripted dramatization of the Waco siege scheduled to conclude on February 28.

It is a miniseries of very high production quality, not least of which is the cast assembled to tell the story of cult leader David Koresh and the 51-day siege by government agents that had such a fiery ending.

The death toll from the siege is as follows: Four agents of the Bureau of Alcohol, Tobacco and Firearms and six civilians, plus dozens wounded, in a fierce gunfight that was the longest in the history of U.S. law enforcement.

Then came the 51-day siege, which ended with the fire that resulted when government agents launched an assault on the Koresh compound. Seventy-six men, women and children died in the fire.

The Branch Davidians attracted the attention of federal law enforcement agencies because the group had apparently been systematically purchasing an unusually high number of firearms and other weaponry, including grenades.

They drew the attention of the feds for other reasons too. Establishing themselves on barren Texas scrubland in a building they built themselves with no electricity, the Branch Davidians were a self-styled religious group that practiced polygamy.

In addition to the weapon stockpile, the feds also heard rumors that child sexual abuse was part of the lifestyle inside the Davidians’ compound.

At the heart of the story is Koresh, played here by Taylor Kitsch in what might turn out to be one of the premiere performances of any actor on TV this year.

The rest of the cast includes three alumni of HBO’s “Boardwalk Empire” -- Michael Shannon, Shea Whigham and Paul Sparks -- plus John Leguizamo, Rory Culkin, Christopher Stanley of “Mad Men” and Melissa Benoist (best-known as the star of “Supergirl” on The CW).

In the premiere episode, we learn about the inner workings of both the cult and the federal law enforcement apparatus, which here includes the ATF and the FBI. Both are riven with dysfunction, a situation that will not bode well for the clash they are headed for.

Infrequent news stories about tragedies related to strange cults have been part of many of our lives, including the story of the Branch Davidians.

Others included the mass suicide at the so-called People’s Temple headed by Jim Jones in Guyana in 1978, and another group suicide by members of the cult known as Heaven’s Gate in a rented mansion in San Diego in 1997.

The tragedy at Waco, however, was not necessarily a mass suicide. Some still debate who really was at fault for the carnage that resulted at the conclusion of the siege, or more to the point: Who set the fatal fire?

At one point in the premiere episode, the FBI negotiator played by Michael Shannon suggests to one of his higher-ups that an increase in FBI weaponry at the site of the siege will only invite more violence. His warning serves as an omen of what’s to come.