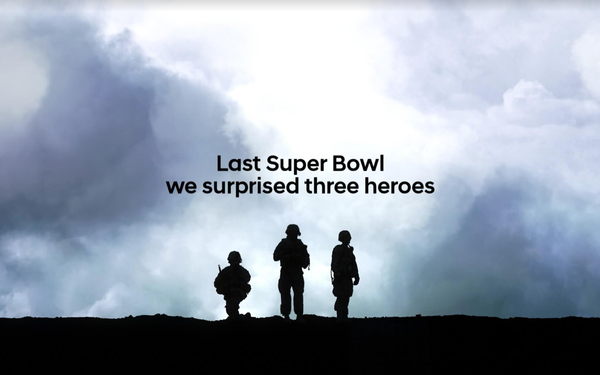 The minimalistic 30-second teaser spot, from Hyundai’s agency of record, Innocean USA, opens by referencing the automaker’s “Operation: Better” campaign, in which three overseas troops watched the game in custom-built, 360-degree immersive pods and were virtually reunited with their families, who were at the stadium. The spot then provides a hint at what’s to come this year, when Hyundai plans to celebrate and surprise millions and "you might be one of them."

“Last year, we hit an emotional chord with audiences as we provided three heroes with an unforgettable experience and helped reunite them with their families,” said Dean Evans, CMO, Hyundai Motor America, in a release. “For this year, we thought, let’s do something bigger and celebrate millions of heroes who have helped a very important cause.”

The spot ran once during both the AFC and NFC Championship games. It is also available for viewing on Hyundai’s website and social media channels, including YouTube, where as of Sunday evening it had been viewed about 2,000 times, on Facebook, where it had about 6,800 views and Twitter, where it had 1,100 views.

Hyundai unveiled its all-new Veloster and Veloster Turbo models at the North American International Auto Show in Detroit last week, as well as a souped-up Veloster that will appear in the movie “Ant-Man and the Wasp.”