Can You Hear Me Now: MRC Finalizes Digital Audio Ad Standard, Will Tackle 'Audibility' In The Future

Few metrics have defined value in the digital marketplace in the past few years as much as the concept of “viewability.” Late last week, ad industry self-regulatory watchdog the Media Rating Council released standards for audio-only digital ads that have nothing to view. But don’t expect the standards to set a new industry benchmark for “audibility,” because that’s still in the eye -- er, make that ear -- of the beholder.

“In today’s digital audio measurement, audibility is considered to be an imperfect analogy to the ‘opportunity to see’ proxy that viewability is in other digital measurements,” the Media Rating Council explains in the final version of “Digital Audio Measurement Standards.”

In other words, there is no explicit definition of audibility, and the MRC says “further study” is required to define one.

As a reminder, the MRC’s current standard for a “viewable” ad impression in visual (static ads) or audio/visual (video ads), is that 50% of the ad must be "in-view" of the user for one second for a static ad and two seconds for a video ad to be counted.

Interestingly, the MRC’s definition of viewability has no factor for the audibility of video ads. That’s interesting, because historically, Nielsen’s active/passive measurement system has only given credit to TV commercials when the audio was on.

Obviously, a combination of legacy marketplace issues is involved in defining new digital advertising currency standards -- and historically, there has never been a unified “opportunity to hear” equivalent of TV’s and video’s “opportunity to see.”

The MRC said it plans to undertake a “future project” to study -- and possibly define -- that, but in the meantime, it seems like the legacy of radio’s audio measurement ratings: an “average connected stream” with audio ads not muted. 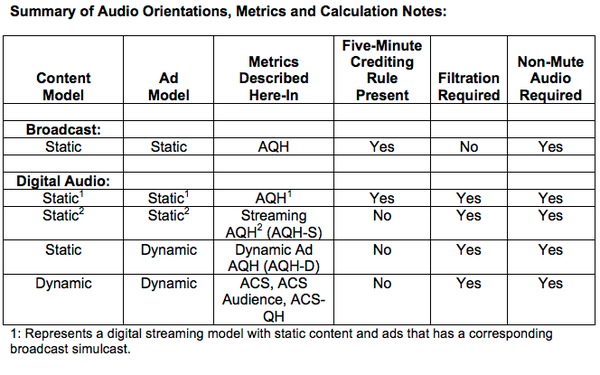