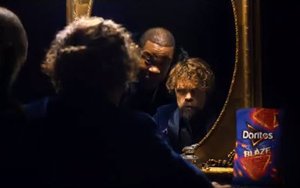 The company has followed up last week’s teaser video — which promised some kind of a “face off” between the products, through actors Peter Dinklage and Morgan Freeman — with a second teaser video (below) that adds hip-hop artists Missy Elliott and Busta Rhymes to the mix.

In the new video, Dinklage, representing Doritos Blaze, and Freeman, representing Ice, are now joined by Rhymes and Elliott, respectively, as they practice saying tongue-twisters as quickly as possible—hinting that this may be the nature of the products’s “face off.”

The creative is from Goodby Silverstein & Partners.