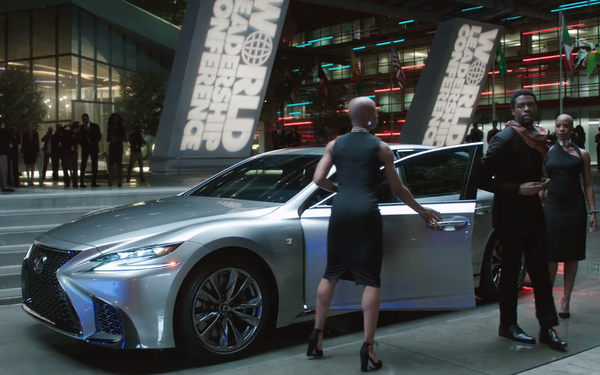 Flying in the face of the Super Bowl "teasers" being released by other brands, Toyota’s luxury brand Lexus released an extended version of its Super Bowl spot, which is tied to Marvel Studio’s “Black Panther” film, due in theaters Feb. 16.

The 60-second extended digital version features the 2018 Lexus LS 500 F Sport alongside Chadwick Boseman as Black Panther and the song “Legend Has It” by Run the Jewels.

The spot, “Long Live the King,” pairs the flagship luxury performance sedan 2018 Lexus LS 500 F Sport with the Black Panther, played by Chadwick Boseman. A 30-second version of the ad will air during the third quarter of the Super Bowl. The spot will continue to run through the month of February in high-profile media properties.

This marks the fourth time Lexus has appeared in the Super Bowl. The automaker last appeared in 2017 with “Man and Machine,” and also had spots run during the 2015 and 2012 games.

“The objective is to introduce the Lexus flagship vehicle to a younger, more diverse audience,” Broyard tells Marketing Daily. “It’s also speaking to anyone with a passion for technological advancements and innovation regardless of age — ‘Black Panther’ is respected as a progressive part of the Marvel superhero legacy.”

In the world of Black Panther and King T'Challa, performance and prestige reign supreme, Broyard adds. “The Lexus LS embodies those qualities as well—performance, prestige, and excellence,” she says.

The spot incorporates actual footage from the film and features many of the film’s actors. The ad was shot using only original costumes and gear from the film.

The Lexus LS 500 F Sport is the only vehicle both powerful and luxurious enough to keep pace with a Super Hero and escort a king, says Cooper Ericksen, Lexus vice president of marketing.

“There is an authentic match between the duality of both the Black Panther and the LS,” Ericksen says in a release. “The spot utilizes the Black Panther’s life as a Super Hero and as royalty to show the two sides of the LS: performance and luxury."