KFC CMO: Reba As First Female Colonel Is First Of Many Surprises For 2018 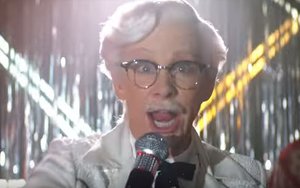 McEntire stars in a campaign for the launch of KFC’s latest permanent menu item: Smoky Mountain BBQ Chicken, crispy fried chicken based on recipes from Memphis and the Carolinas.

The country star was a perfect fit for this product launch because of her southern roots and entrepreneurial spirit, says Andrea Zahumensky, who became chief marketing officer of KFC U.S. in December.

McEntire debuts as the Colonel in a 60-second TV ad (below) set in a honky tonk, performing an original ode to the Colonel and the new chicken variety that was written by the brand’s creative team. (The “real” Reba also makes a cameo, in the audience.) A 30-second version will air during CBS’s broadcast of the Grammy Awards on Sunday night.

The team has produced four different spots featuring McEntire, the most recent Colonel in a string of nearly a dozen introduced since 2015.

Zahumensky, who tells Marketing Daily that KFC thinks McEntire could turn out to be “the most-loved Colonel yet,” also promises plenty of more surprises in the year ahead.

Zahumensky now reports to the previous CMO, Kevin Hochman, who was promoted to KFC U.S. president and chief content officer last March. Hochman was instrumental in jump-starting the brand’s revival by returning to its roots, launching the series of buzz-generating Colonel campaigns and promoting new but brand-consistent menu items and offers.

Rival Chick-fil-A supplanted KFC as the country’s #1 QSR chicken chain back in 2013. But KFC — which has also been investing in remodeled facilities, ordering technology and other upgrades — has indeed been in comeback mode. While still #2 in U.S. dollar sales, KFC’s sales rose 4% in 2016, to $4.5 billion (to Chick-fil-A’s $6.7 billion), according to Technomic data published by Restaurant Business. Further, its U.S. unit volumes were double those of Chick-fil-A.

“We believe that we’re starting chapter two of the revitalization of the brand, says Zahumensky, who most recently served as brand director for Procter & Gamble’s baby care division in North America.

One current example: the “KFC Comfort Zone,” a guided meditation series based on the “comforting, filling warmth” of the brand’s pot pie.

Since being posted on January 18, the campaign’s introductory, 10-minute infomercial has already pulled 465,000 views. That is followed by four more videos guiding fans through meditation and affirmation techniques amid chicken pot pie themes and visuals, with titles like “The Zen of Steam,” “Be Tender, Like Chicken” and “The Rich, Creamy Matter of the Soul.”

Last year, KFC created a social sensation by “hiding” its famed “Secret Recipe,” featuring 11 herbs and spices, on Twitter and then announced that it had stopped following everyone but six guys named “Herb” and the five Spice Girls on Twitter. After one Twitter user finally noticed the recipe posting and trumpeted the news across social (becoming a social star in the process), KFC rewarded him with a custom painting of him with Colonel Sanders and a year’s worth of $5 Fill Up meals.

That campaign — one of several viral hits from KFC in recent times — generated more than a billion impressions, according to Zahumensky.

1 comment about "KFC CMO: Reba As First Female Colonel Is First Of Many Surprises For 2018".
Check to receive email when comments are posted.
Next story loading