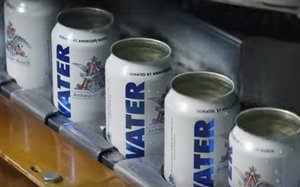 Budweiser is joining sister Anheuser-Busch InBev brand Stella Artois in highlighting a water-related cause marketing approach to its Super Bowl ad this year.

Whereas Stella Artois’s ad features its partnership with Water.org, Budweiser’s, unveiled today, is based on the brand’s having donated 79 million cans of water to disaster relief efforts over the past 30 years.

The 60-second spot (below) shows a real AB InBev employee —Kevin Fahrenkrog, general manager of the Cartersville, Ga., Brewery—responding to a middle-of-the-night call to go to the brewery to supervise switching the production line from cans of Bud to cans of water. The cans, labeled as water, also bear AB InBev’s corporate logo.

Screen messages show the disaster locations where Budweiser has sent some 3 million cans in just the past year — Texas, Florida, Puerto Rico and California — followed by the promise: “Whenever you need us, we’ll stand by you.”

The ad, from David Miami, features a cover of “Stand By Me” recorded by Skylar Grey specifically for the ad. A portion of proceeds from the single will go to the American Red Cross, Bud’s partner in the water relief program.

Timed to coincide with the 30th anniversary of the program and the Super Bowl ad, AB InBev is declaring its ongoing, long-term commitment by announcing that it will this year add a second facility, its Fort Collins, Colo., brewery, to the program to enable delivering water more quickly when disasters occur.

“This is a story about the incredible people behind our iconic brand,” stated Ricardo Marques, vice president of marketing for Budweiser. “Budweiser is one of the most highly anticipated brands on Super Bowl Sunday, and we couldn’t imagine a better stage to celebrate employees and build on our long-term commitment for disaster relief.”

This spot will mark Budweiser’s 29th consecutive year advertising in the Super Bowl, and its first Bowl ad since 2001 that will not feature or include the brand’s iconic Clydesdales.