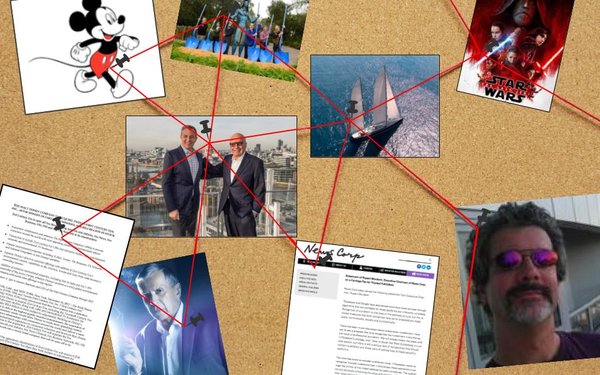 How long has this Walt Disney/21st Century Fox deal actually been percolating behind the scenes? A year? More? Is it possible the deal has been in the making for nearly a decade?

Lay out a timeline of events and start to connect the dots, and the surprise mid-December announcement of the Mouse that ate the Fox doesn’t seem like a surprise at all. The signs were there.

Suddenly, Disney’s announcement that it would be building a "Pandora" world (from "Avatar") inside Disney World, all the way back in 2011, doesn’t appear so out-of-left field anymore.

It seemed a head-scratcher at the time -- why is Disney promoting a Fox property? -- but boy, it sure evolved into a great "corporate synergy" now! Especially with “Pandora: The World of Avatar” opening in Disney World’s Animal Kingdom less than six months before the acquisition was announced.

It isn’t the first time we’ve seen something like it, either.

Is it just another coincidence that the very first non-Mouse properties to be featured in Disney amusement parks were branded entertainment rides for Lucasfilm’s Star Wars and Indiana Jones? Both now belong to Disney, just like “Avatar” (the “Star Wars” franchise was even distributed by Fox, prior to Disney buying Lucasfilm).

But what about another, less publicized event that happened, nearly concurrent with the announcement of Disney's plans to buy 21st Century Fox: Rupert Murdoch suffered a significant back injury on his son Lachlan's yacht during the holiday season. The injury wasn’t announced in the press until weeks later, and not made public until after he had left an undisclosed Los Angeles hospital.

How did that manage to stay quiet for nearly a month? It reminds me of when “Justice League” closed down production for two weeks so director Zack Snyder could tend to the death of his daughter. Hundreds of people were involved in that movie -- you would presume somebody would leak something, yet nobody reported anything.

Anyway, back to Rupert.

We've learned about Murdoch’s yacht accident because he allegedly sent an email announcing that he would be recuperating from home. But unlike the way these things usually go… no publication actually has the email. Every story I’ve read says, "according to a person familiar with the matter," or "according to a source who's seen the email."

In fact, all the reporting on Murdoch's accident and the subsequent email seems to hinge on Vanity Fair, which broke the news, and is cited in every other bit of reporting I have been able to find.

But as best I can tell, nobody has the email. Variety said in its coverage that it had "confirmed" the email, but didn't say from who or how. Even that is a step above everybody else, who merely cite Vanity Fair’s "exclusive."

Others report Murdoch is recuperating "at home." Which home? In what country?

It’s also interesting to note that during this period of Murdoch being out of commission, his flagship news property, The Wall Street Journal, accused Murdoch’s ex-wife Wendy Deng of being a Chinese spy. In fact, the story about Murdoch's yachting accident came one day after the WSJ broke the Deng story.

Neither The New York Times nor The Washington Post has touched the Deng story, incidentally. Or any of the cable news networks. Maybe there’s just not enough room, considering all the Russian conspiracy theories that need to be reported. Breathlessly. Every day. From anonymous sources.

News Corp did issue a three-paragraph “statement” from Murdoch this week about how much Facebook and Google suck and need to begin paying “a carriage fee to trusted publishers.” Just to assure us he’s all still alive, I guess, but why a public statement? Almost always, Murdoch gives an exclusive interview to one of his publications when he has something important to say. A public statement by press release is… rare. You’d have to go back to 2014 on the News Corp Press Room to find one, and it’s about a charity, not a critical business opinion.

Then, on Friday, Bloomberg delivered a huge profile on Lachlan Murdoch, with the unexpected revelation that the “prodigal son” would be taking over Fox following the Disney acquisition “no matter his father’s wishes.” No mention of dad’s accident on Lachlan’s yacht, though.

What does it all mean? To me, right now, there’s enough fogginess to make Rupert Murdoch Schrodinger's mogul. He’s probably alive, but there’s been enough secrecy and weirdness going on to raise the question. There’s a ton of scrambling, getting (Donald) ducks in a row and dollars on the table lined up.

And… Wendy Deng a Chinese spy? What does Tony Blair have to say about that?