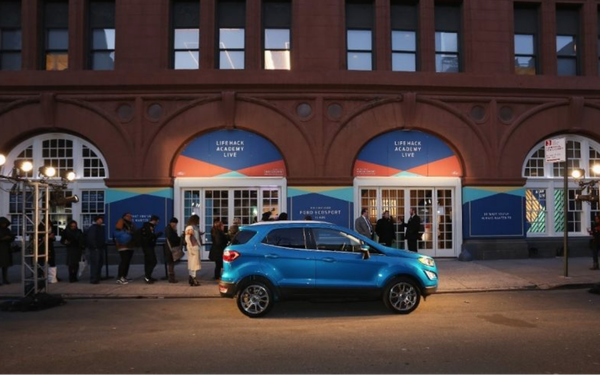 Ford Motor Co. is launching its first-ever compact SUV, promising that it allows consumers to do things they never could before — like fit more into their day, "hack"their lives and accomplish "first-ever" tasks.

The automaker is launching a marketing campaign as the vehicle arrives at dealerships, starting with an EcoSport Life Hack Academy in New York featuring life-hacker and TV personality Tia Mowry. Attendees at the Jan. 25 event were able to learn simple hacks for both inside and outside the vehicle. The event included hacks on weekend getaways, fitness, meal preparation, small spaces and careers.

“The event is an exciting culmination of our campaign efforts to date, and as the ‘first-evers’ campaign kicks off, we hope to explore the potential to extend this in other parts of the country,” Cristina Aquino, Ford marketing manager of mini and medium utility, tells Marketing Daily.

Ford is creating a 10-part video series hosted by Mowry, which provides important life hacks to help inspire women who do it all to tackle any task with ease. The content lives on social.ford.com and Ford's YouTube channel.

“Both share a common life stage and psychographic — they are optimistic, active, and outgoing, and love the freedom that is enabled by our fun, capable, and connected EcoSport,” she says. “However, these two targets relate to brands differently.”

Millennials desire a relationship with their brands, which is why Ford began the conversation with that demographic in Los Angeles in November 2016 with an entertainment-focused effort.

“When you consider the entire campaign from a broader lens, we've spoken to both audiences at different moments to drive awareness and excitement for the vehicle across the entire target segment,” she says.

Ford will also expand its ad campaign with a digital component aimed at helping consumers experience various first-ever adventures. Visitors to the campaign website answer the question, “What do you want to do for the first time?” and Ford responds by making some dreams a reality. Consumers can visit www.firsteverecosport.com and enter the contest.

TV spots will debut during the Winter Olympics Opening Ceremony on Feb. 9 and will run through May. Two 30-second spots, from GTB, will bring to life how the EcoSport will allow people to do more in their lives. The ads highlight through real-life moments how the EcoSport can enable “first-ever” moments, Aquino says.

One spot captures a daughter taking her mother out for "Night Skiing," and the second spot, “Photo Show,” follows a woman as she captures the local faces in her community for her first ever public photo exhibit. Beyond the TV placement, the ad creative will roll out on digital, social, print and outdoors.

“As the latest addition to Ford’s SUV lineup, the EcoSport is arriving at a time when SUV momentum is particularly strong,” Aquino says. “Over the last three years, the compact SUV segment in the U.S. has more than tripled in size, according to industry reported data.”