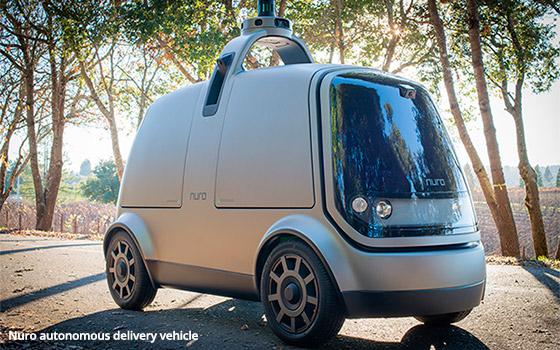 The technology for self-driving vehicles is moving right along, but the question of who or what will ride inside such vehicles is still to be determined.

The recent announcement that Waymo is buying thousands of self-driving minivans for a ride hailing service is but one example of autonomous vehicles carrying people. Apple also recently increased its self-driving California test fleet to 27 cars.

However, there are other programs where self-driving vehicles are being designed to carry things rather than people.

For example, the focus of Nuro, a startup by former Google engineers, is to create a vehicle to deliver things such as groceries or laundry. The vehicle is targeted for local goods transportation.

At CES, Toyota showed a concept vehicle that could carry people, but also could be used for food delivery, or even be converted essentially to self-driving food trucks. Pizza Hut already has a deal with Toyota to jointly work on pizza delivery by autonomous vehicle.

For Mother’s Day last year, 1-800-Flowers.com used robots from Starship Technologies to deliver flowers, though those particular self-driving vehicles are too small to carry people, and Amazon is working on delivery of things by drone.

Ridesharing companies Uber and Lyft are the most obvious major entities to move to self-driving vehicles to replace the overhead of paid drivers.

Whether the public will jump on board the driverless train is yet to be seen.

The AAA study last week found that 63% of U.S. drivers are afraid to get into a self-driving vehicle, so there is that potential hurdle. But then again, not everyone uses Uber or Lyft for transportation.

The more likely at-scale move to autonomous movement is of things. The things don’t have to be convinced to get into something over which they have no control.