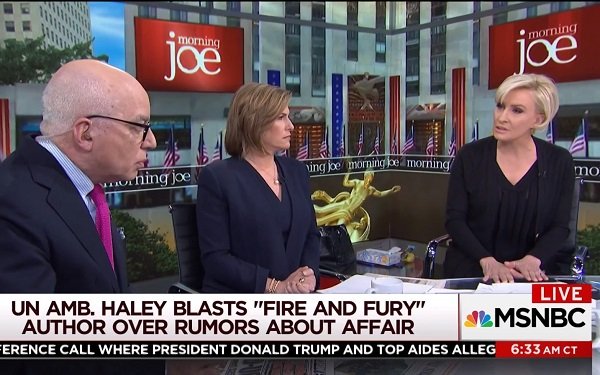 Mika Brzezinski declared her show “Morning Joe” to be a No-BS Zone Thursday morning and then promptly dismissed Fire and Fury author Michael Wolff from the show.

It was a dust-up made for social media as Brzezinski and other panelists on the MSNBC show accused Wolff of propagating rumors that President Trump is carrying on an affair with Nikki Haley, United States ambassador to the United Nations.

As Wolff attempted to stammer a denial that he did any such thing, an angry Brzezinski admonished him and then declared the interview over. The incident almost instantly became fodder for breathless coverage elsewhere.

And much like Donald Trump, who is the subject of Wolff's Fire and Fury book, Wolff took to Twitter to spin his own version of what happened.

“To be invited on a show with the purpose of being thrown off … is the new television,” read one of Wolff's tweets posted later on Thursday morning.

An interesting take, but not exactly new -- people have been asked onto TV shows for years for the express purpose of having them fight and then, in at least some instances (if not many), being thrown off. This is not exactly “new television,” but just “television.” (See: “Jerry Springer.”)

“The last time I was on Morning Joe, Joe and Mika eager to gossip about who Trump might be sleeping with,” Wolff tweeted later, implying that Brzezinski and co-host Joe Scarborough are hypocrites.

You half expected Wolff to punctuate his tweets with a final “Sad!” in the manner of Trump himself.

Wolff was on “Morning Joe” to discuss various subjects related to the Trump administration. After dispensing with other topics such as the ongoing stories about Russian collusion in the 2016 election, the subject switched to Nikki Haley, who recently denied that she ever had an affair with Trump and blasted anyone who would suggest such a thing.

The rumors about Haley and Trump might have originated with Wolff via an unspecific inference in his book. At least, that seemed to be the contention of the “Morning Joe” panel.

It wasn't Brzezinski who got the ball rolling on this subject. It was Susan Del Percio, a political consultant. The other panelists were Mike Barnicle and Jeffrey Goldberg, editor in chief of The Atlantic. Joe Scarborough was not in the studio.

From the outset of this portion of the segment, it was pretty clear that Del Percio and Brzezinski had axes to grind with Wolff.

“You made some news this weekend talking about things you didn't know firsthand, saying you believed it was true but you had no proof that the president had an affair with someone in his administration,” said Del Percio to Wolff.

“First of all, I didn't go after her and secondly, what I, um, certainly what I meant was I found it puzzling that she would deny something she wasn't accused of,” said Wolff, who repeatedly denied ever suggesting anywhere that Trump's secret White House paramour (if there is one) is or was Haley.

Then Brzezinski jumped in with an expression on her face that was even more cross than Del Percio's.

“Wait a minute! Can I just step in here?” Brzezinski said angrily. “Let's put this next question … the entire credibility of your book, which was written really quickly …”

“Your book,” continued Brzezinski. “Let's put it on this next question. Do you regret inferring anything about Nikki Haley?”

“I didn't infer anything about Nikki Haley,” Wolff said. “What I inferred was that the president is, um, um, is that many of the people around the president believe he is still involved with various women …"

“No, but you said she [Haley] spent a lot of private time with …,” said Del Percio, who was cut off by crosstalk that suddenly broke out among the panelists.

Wolff then reiterated that he felt it was odd that Haley was denying an affair when no one (especially him) ever mentioned her name specifically in the context of the affair rumors swirling around the president.

Brzezinski appeared to be so angered by this that she then launched into a tirade that accused Wolff of “playing games.”

“Michael, you said she has embraced it,” Brzezinski ranted. “I am going to go as far as to say that you might be having a fun time playing a little game dancing around this, but your slurring a woman -- it's disgraceful!”

To which Wolff replied, not unreasonably: “Mika -- again -- she has been accused of nothing. She has decided to deny what she has not been accused of. … Certainly I didn't accuse her of this.”

Goldberg and possibly Barnicle both chimed in at this point, but Brzezinski cut through the crosstalk to confer “No BS Zone” status on “Morning Joe.”

“C'mon, are you kidding? You're on the set of ‘Morning Joe’!,” raged Brzezinski, who then added this debatable assertion: “We don't BS here!”

After some more commotion and crosstalk, Brzezinski ended the segment. “I'm sorry. This is awkward,” she said. “You’re here on the set with us, but we're done. Michael Wolff, thank you. We're going to break now. Good-bye, everyone.”

politics, tv
1 comment about "TV News Gets Springer-ized As 'Fire And Fury' Erupts On 'Morning Joe'".
Check to receive email when comments are posted.
Next story loading