No Surprise: Trump's A Looney 'Toon In New Colbert Series 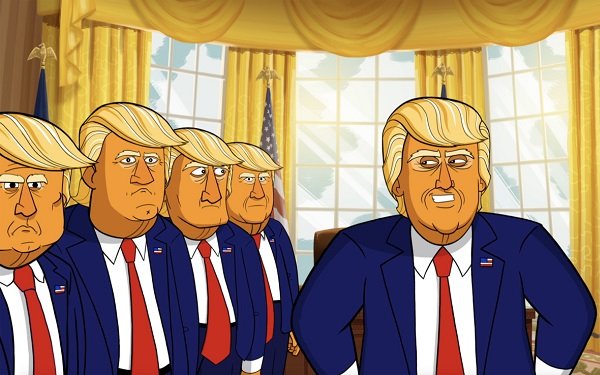 It is clear by now that many people in the business of producing TV comedy must believe that the appetite for anti-Trump material is basically bottomless.

And who can blame them? The administration of President Donald J. Trump has provided enough material to ensure continued employment for years for hundreds of people involved in writing and producing comedy bits and scripts for television.

Late-night TV in particular has benefited from the Trump motherlode of comedy material that has helped upend the traditional rankings in the time period.

“Saturday Night Live” and “Jimmy Kimmel Live” have gotten boosts in the ratings for their focus on Trump.

And Stephen Colbert's “Late Show” on CBS catapulted into first place ahead of “The Tonight Show Starring Jimmy Fallon” largely on the basis of Colbert's nightly, non-stop attacks on Trump.

Colbert is such a true believer in the power of Trump-based comedy that he has now produced an animated anti-Trump series that CBS-owned Showtime has generously agreed to air.

The show has the rather obvious title of “Our Cartoon President.” Ten half-hour episodes have been made, with the first one due to premiere on Sunday, February 11, at 8 p.m. Eastern.

The art, animation and voice characterizations on this show are all of a very high quality. Special recognition goes to an actor named Jeffrey Bergman for his skill at impersonating Trump and maintaining the quality of this impression for entire episodes of this show. That is no mean feat, since the Trump character is in almost every scene.

In the premiere episode, a very self-centered President Trump is seen preparing to deliver his first State of the Union address.

While he ponders the best way to present himself on this crucial evening, a number of caricatured notables enter and exit his life -- family members such as his wife, sons and daughter, various cabinet secretaries and members of Congress, both Republicans and Democrats.

Predictably, everyone is a buffoon. Come to think of it, just about every character in this show comes off as badly as Trump, so at least you can credit Colbert and his co-producers and writers with being equal-opportunity offenders.

The problem with this show, if there is one, is that it adds nothing to the already voluminous avalanche of Trump satire that is already available everywhere.

It is a one-note, one-joke show based on the premise that Trump is a self-centered idiot. Many people already think this, which means this show's audience -- if there is one -- will mainly be people who are already soaking up the Trump comedy on Colbert's “Late Show” (and everywhere else) and have no problem with taking in even more of it.

Many other people, however, may have reached their limit. They might be asking: Who needs this show when I already get my fix of anti-Trump sentiment on the late-night shows all week long?