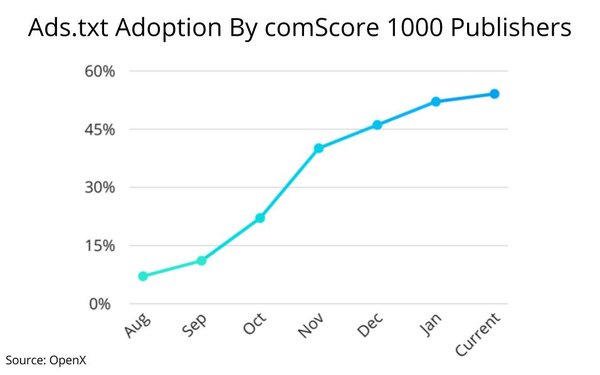 Seven months after the Interactive Advertising Bureau’s Tech Lab released final specs for ads.txt, the new standard for sanctifying the reselling of publishers’ inventory has reached critical mass. More than half of comScore 1,000 publishers have now integrated the code, which certifies third parties approved to resell their audience inventory.

“The rapid adoption of this initiative highlights the need in the market for solutions like these while building confidence in the value of programmatic overall,” John Murphy, head of marketplace quality at OpenX, asserts in a statement issued as part of an analysis released this morning by the digital inventory exchange showing that adx.txt adoption surpassed 50% of comScore 1,000 publishers, effective January 11 (see chart).

The adoption has accelerated from as recently as one month ago, when only a minority of top publishers had integrated ads.txt.

According to OpenX’s analysis, the penetration stood at just 7% in August 2017, just after the IAB tech lab released a final standard.

In early December, Pixalate released an analysis showing that penetration had reached just 18.6% of Alexa 1,000 publishers. According to Pixalate’s current tracking, ads.txt penetration among those publishers still is only 23%, but currently surpasses 58% of Pixalate’s top 1,000 sites.

Whatever basis you use to analyze it, adoption of the new industry standard for filtering publishers’ inventory authorized to be resold is gaining momentum and has reached critical mass.

OpenX claims to be the first digital advertising exchange to be 100% compliant with ads.txt, vowing to “block all reseller traffic that is not authorized on a publisher’s ads.txt file from entering its exchange.”