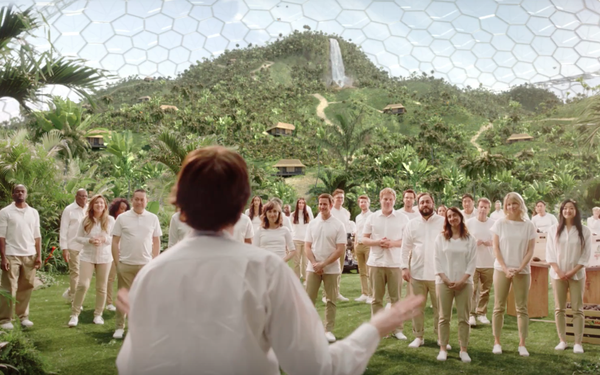 Avocados From Mexico’s fourth consecutive Super Bowl ad uses a humorous scenario set in a domed enclosure to drive home the point that the green fruit can be enjoyed in many ways, not just guacamole.

In the 30-second “GuacWorld” ad (below), residents of an artificial world, designed to seal in all that’s healthy and serene and seal out all that’s “bad,” freak out when they realize that they have ample supplies of avocados, but the chips have been left outside.

Peace is (temporarily) restored when a staff person points out that “avocadoes taste great on lots of things,” including avocado toast.

The brand has also posted a 60-second version of the ad. As with AFM’s previous Super Bowl spots, GSD&M supplied the creative strategy and production.

GuacWorld avocado emojis are being included in the Inmoji, Kik and Tango apps to achieve exposure to a half-billion users according to AFM. Each location has its own theme and experiences, including games, recipe builders, video content, artwork, and prizes including a year’s supply of AFM avocadoes, trips, and limited-edition art.

In addition, the brand partnered with Picmoji to develop a “first-to-market” emoji experience, called The Avo Picmoji, that can be used across iMessage, FB Messenger, WhatsApp, Snapchat, Android, Tango, Kik and other platforms.

Havas Media handled the media, and Richards Lerma the social and digital media, for the campaign.